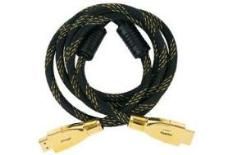 It may look the part, but we found it wanting

At first glance, VAS's Mirage HDMI cable is a bit of an eye-catcher -especially at the lower end of the mid-price range; sheathed in black with gold sparkly bits, this would appear to be the Liberace of HDMI cables, vying to get your attention. It's all a bit glam really.

But for all its 24k gold glamour, can it deliver? Pictures from the Mirage are reasonably detailed, and when compared with a cheap freebie HDMI cable, the sharpness of the images stands out clearly.

Colours are more vivid, as well as a bolder sense of contrast, and there's a definite sense of all-round improvement, especially in a film such as The Lord of The Rings.

Yet against its contemporaries, the Mirage loses out. Edge definition is shown to be seriously lacking, noise levels aren't acceptable and, worst of all, natural light on the screen takes on a harsh unnatural glare, redolent of an enormous arc lamp.

For all its gold plating and apparently capable specs, this HDMI can't hold its own against anything but a free cable. At £40 it should have been a bargain, but in reality, it's the epitome of the phrase 'looks aren't everything'.