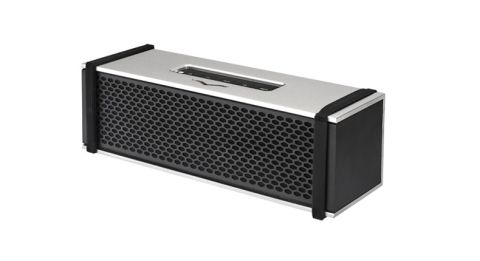 A wireless speaker that costs too much and offers too little

To take inspiration from R. Kelly’s Ignition, we’re going to “go head on and break ‘em off with a lil’ review of the remix” – the V-Moda Remix, to be precise.

With sides that can be custom-made to a range of different designs, V-Moda claims the Remix is the world’s first 3D printed custom speaker. But not content with one ‘world’s first’, the Remix is also claiming the title of the first two-in-one speaker and headphone amplifier.

These are both impressive claims that would be music to our ears if this speaker sounded good too. Unfortunately, it doesn’t.

Let’s begin with the sides. Our review model comes with a smooth silver aluminium finish, which is held on by two square rubber-like bands and screws.

However, for those with more flamboyant tastes, not to mention bigger wallets, V-Moda also offers the Remix with sides made from gold, platinum, steel or carbon fibre.

To buy something so ridiculously expensive would be an affront to good hi-fi, not least because V-Moda cannot guarantee that the sound quality of the Remix will be maintained when you mix and match materials.

Yes, that’s right too – a disclaimer in the manual says the company will not be responsible for the acoustics performance after customisation.

Whatever material you choose, underneath it there are two 38mm full range drivers driven by 9W of stereo amplification, and passive bass radiators to boost its low-frequency performance, too.

On the top are buttons for power and volume control, with the V-Moda logo acting as multi-function management of playback – one button to pause, two to skip tracks and so on.

The dedicated pairing button for Bluetooth is a nice touch, and makes setting up this speaker more intuitive than others.

Round the back is the USB-C charging port, which should keep this speaker relatively future-proof should the shift to MicroUSB happen. The claimed battery life is ten hours.

There’s also 3.5mm input for audio, and a 3.5mm headphone output labelled “VAMP” so you can use the headphone amplifier built into the speaker.

Connect your audio source to the speaker using the 3.5mm cable, plug in your headphones, hit the multifunction button and the little power LED on the top of the Remix will turn orange, signifying that it’s now in “VAMP Mode”.

V-Moda says that the Remix is comparable to standalone headphone amplifiers worth $200 (£150), but we have to disagree.

To its credit, the Remix offers more clarity and space compared to the sound from your smartphone, but it’s debatable whether those gains are worth the hassle of having to carry the speaker around with you.

The problem is that other hi-fi kit has been designed to perform this function, such as AudioQuest’s DragonFly Red portable DAC, which is more dynamic, exciting and dimensional.

At just under a kilo, the Remix weighs about five times as much as the DragonFly Red. It’s also quite bulky, and needless to say, the latter is easier to carry around.

Moreover, with many premium smartphones now ditching the headphone jack, it’s questionable as to how useful this amp function will be.

Many older smartphones – and the Samsung Galaxy S9 – still retain their headphone jacks though, so it’s not quite curtains for the conventional connection.

The Remix also has a built-in microphone so you can take calls using it, and you can connect two devices to the Remix at the same time.

V-Moda also says that the speaker has a ‘daisy chain mode’ for connecting multiple speakers together, however you can’t do this through Bluetooth as with most other speakers, instead you will need to use the 3.5mm cable.

This could all be overlooked, however, if the speaker blew us away when it came to sound quality. Alas, we’re left wanting.

After running it in over a weekend, we pair it to an iPhone 8 and play Leonard Cohen’s You Want It Darker. Immediately, the deep heartbeat bassline at the start of the song overpowers the ethereal vocalisations, making it tough to enjoy the track.

Those loose, lumbering low frequencies aren’t particularly insightful either; presenting a one-note rendition that mashes together each note of the bass guitar into an amorphous blob. By the time the growling vocals come in, it’s starting to sound like a parody of a Leonard Cohen song.

We change to something livelier and brighter to test out the treble, playing Nicolas Jaar’s The Governor from a MacBook Pro. Here too there are issues, with a sharpness in the shining cymbals that makes it difficult to listen to over long periods.

This is a naturally skittish track, and a good wireless speaker needs to be able to keep up with the moving cymbals and twinkling percussion. However, the Remix can’t quite handle the timing and the song comes across too messily for our liking.

Ignition by R. Kelly reveals that this speaker’s sense of space could be a little better. It’s comparatively more compressed than the sound from other speakers, unable to give Kelly’s lyrics the room they need to stand out from the papery drums or the electronic effects that keep time throughout the song.

In addition, the fact that this speaker is directional – rather than having the omnidirectional approach of speakers like the Ultimate Ears Blast (£150) or the Vifa Reykjavic (£180) – means that the Remix isn’t as useful in a group environment or a party scenario.

In other aspects, this speaker is decent at best: the midrange is detailed to a certain degree, and there’s an acceptable amount of dynamism.

Playing Vampire Weekend’s Mansard Roof, the way that the keyboard and drumbeat strikes up – in contrast to the solitary vocals from Ezra Koenig – is forceful, but doesn’t match up to the standards set by other wireless speakers such as the Blast.

Apart from being a potential demonstration of extreme wealth, the V-Moda Remix doesn’t have much to offer.

The price is rather steep, even for the regular, no-frills version, and the absence of useful features such as the ability to connect to other speakers wirelessly make it less suitable for everyday circumstances.

The feature it offers instead, its VAMP headphone amplifier, doesn’t bring enough to the table to make up for it, and as a result this is a product that feels as though it has spread itself too thinly.

All this, added to the substandard audio quality, means that we’d recommend looking elsewhere for your next on-the-go speaker.

Read all our V-Moda reviews