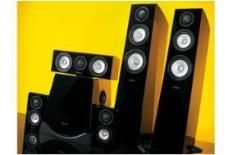 The key to surround systems is cohesion, and the Yamaha NS-700 doesn’t quite have it

Yamaha's hi-fi and AV electronics have attracted much attention in recent years, but other than the odd pair of interestingly shaped Soavos, there's been little in the way of speakers to get excited about.

The manufacturer is looking to change that with two new ranges aimed at the home cinema market: the compact NS-210 series and this, the NS-700.

Distinctive subwoofer
This series consists of five different units. The four that appear in this set-up are the floostanding NS-F700, the NS-C700 centre, the wall-mountable NS-B700, and the unusually shaped NS-SW700 subwoofer.

The combination of glossy black casework and pure white drivers won't be to everybody's taste, but there's no denying the quality of build, and you can always put the grilles on if you really must.

Of course, the sound performance is what really counts, and a play of the John Legend: Live at the House of Blues Blu-ray produces initially pleasing results.

The impressively recorded vocals come through with all the detail and clarity necessary to reveal the nuance of the live delivery, while the bassline proves the sub has great tonality and articulation.

Over-exuberant treble
Unfortunately, the treble is a little hard and over-exuberant, meaning the cymbals steal your attention far too often, and this is fatiguing over a long listen.

Ironically, compared with the best in class, the Yamaha is missing punch and attack in the midrange and bass, leaving it lacking those extra levels of excitement and drama.

These traits continue when you switch to a movie, where it also becomes clear that there are tonal inconsistencies between the speakers.

Performance is front-heavy
Perhaps unsurprisingly, the compact nature of the surrounds prevents them from matching and integrating with the front left and right, leading to an overall performance that's front-heavy.

There are also discrepancies between the floorstanders and centre, making it all too clear that you're listening to separate speakers, rather than an immersive, seamless field of sound.

Play Outlander on Blu-ray and environmental effects such as falling rain and rustling leaves don't fully surround you, so you're not left feeling as though you've been transported to the forests of Norway.

It's this that really prevents this Yamaha package scoring high, but the fact you can buy better systems with greater punch and treble control doesn't help its cause.