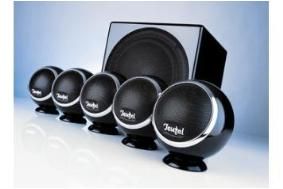 The Motiv 3 can’t quite claim the top spot, but is another solid showing from a likeable manufacturer

Teufel is an easy company to like. The German manufacturer offers its vast range exclusively through its own website as a means of keeping prices low; it provides an eight-week returns policy (and covers the cost of return shipping); and it guarantees all speakers for 12 years.

But for all that, a quick look in our Buyer's Guide shows that Teufel is still awaiting its first five-star verdict. And as good as this Motiv 3 package is, it's a case of close but no cigar.

The £460 price we've quoted includes delivery to the UK, and the box that arrives contains five identical orb-shaped speakers, magnetic pedestal stands for them to sit on, and the smallest subwoofer we've seen for a while.

The unique styling of the satellites makes them appealing to look at, and even though handling them does reveal their budget materials, they seem well made.

Each of the satellites has an 8cm full-range driver capable of reaching down to 120Hz (30Hz lower than close rivals), and this contributes to a seamless tonal crossover with the subwoofer.

Bass lacks tautness
It's a little surprising then that the bass should stick out a touch when playing John Legend's Live at the House of Blues Blu-ray.

The problem is that while there's no tonal gap, the sub can't quite match the tautness and rhythm of the midrange and treble from the satellites.

It's not far behind, and we've heard much worse in this regard, but it is enough for the bassline to sound a little soft and tardy.

Huge, enveloping explosions
Top of the list is that the Teufel system offers a most cohesive three-dimensional soundfield, and reproduces the action of the desert finale in Transformers 2 with a brilliant sense of scale.

Explosions are huge and enveloping; bullets fly around the room accurately and without gaps; and the overall soundstage is one that's deeper and more three-dimensional than that of its peers.

This is the kind of blockbuster scale previously unavailable from style speaker packages costing under £500.

We're once again impressed with the punch of the satellites, too, with every gunshot being conveyed with sudden and precise power.

However, that slight lack of attack and precision from the subwoofer means there's a smidgen of solidity and detail missing, after the initial transient hit of the most punchy sound effects.

In the end, if the Teufel was slightly more affordable, we'd likely be granting it that elusive fifth star, thanks mostly to its cohesion and scale.

But as it's a comparably expensive system, those slight flaws mean that four stars will have to do.