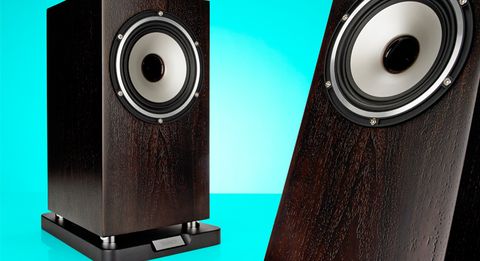 A brilliantly speedy, fluid and refined pair of speakers that look smart and sound exciting

When a hi-fi manufacturer reinvents one of its most successful products, we’re excited and cautious in equal measure. The new Tannoy Revolution XT range has the weight of expectation behind it.

Tannoy’s original Revolution series bore many Award-winners, including the Revolution DC6 standmounters and long-standing favourite DC6T SE floorstanders, so it’s only natural to expect great things from this redesigned speaker range. The Tannoy Revolution XT 6 standmounters are the first to come under our scrutiny. And we’ve come away excited.

Play The Imitation Game soundtrack, and the XT 6s zing through the fluid piano chords and the soaring strings with alacrity. These are nimble, speedy speakers. Give them a synth-heavy Nine Inch Nails track, or the lilting, exotic vocal quirks of Björk, and the XT 6s will happily nip along each note with a precise, attacking manner.

The Tannoys deliver a wide arc of sound, with plenty of space for individual strands to breathe. Detail is crisp and refined, with the midrange sounding particularly fluid and expressive.

We’d like a bit more weight and muscle to the XT 6s’ sound, though. They have a lean presentation – which is great for agility and timing, but less so for the layers of rich, textured detail needed fully to engage our attention. Rivals offer a punchier, more full-bodied sound that’s more satisfying to listen to.

The squelchy bassline in Wildfire by Sbtrkt never puts a toe out of line, but it’s not quite as rumbling and textured as it should be. The grungy, thumping drum beats in Marilyn Manson’s Killing Strangers lack the muscle needed for a satisfying impact; rival B&W 685 S2s (£500) have the appropriate weight and power to show exactly how it’s done.

We’d recommend placing the Tannoy speakers close to a wall, as it adds some much-needed solidity and punch to the sound. Be wary of partnering the speakers with any bright-sounding equipment, too, as you don’t want to exaggerate that lean character.

The XT 6s look smart. The trapezoid cabinet is as sturdy and beautifully made as ever – it serves not only as a visual touchstone to the old Revolution range, but the shape is also crucial in reducing internal standing waves.

The XT 6s come in dark walnut or medium oak options, and the wooden finish is of a splendid quality. We also like the little flourishes that spruce up the speaker’s design, such as the Tannoy logo engraved on the tiny fixings on the driver – it’s the kind of attention to detail that makes all the difference at this price.

The ‘XT’ in the name stands for ‘extra technology’, although the changes to the new series seem too significant to be called merely ‘extra’. First, Tannoy’s signature Dual Concentric driver has been redesigned to improve the integration between the tweeter and mid/bass driver.

The new design brings the tweeter a touch forward (improving dispersion), while also remaining time-aligned to the low-frequency driver.

The more obvious change is the addition of a plinth, which can’t be removed. Bolted to the base of the speaker, the plinth acts both as a built-in stand and to help distribute the energy coming from the downward-firing port as evenly as possible.

We’re not entirely keen on the plinth design. They make sense when the XT 6s are standing on their own on a table or placed on a bookshelf, but ideally you want to place them on dedicated stands. And this can look awkward, with the larger plinth jutting out, especially if the aesthetics don’t match your existing stands.

We’d like a sleeker design, one that fits in more seamlessly with the cabinet’s structure, such as what Wharfedale has done with its Diamond 220s.

The Tannoy XT 6 speakers are certainly ones to watch out for. Their fluid, light-footed presentation and crisp detail are worth a listen – we just wish there was a bit more brawn and richness to the lean sound.

There's no shortage of fierce competition at this price, but the Tannoy's refined, exciting delivery still makes them a compelling proposition.