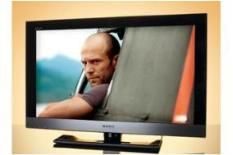 The EX503 is something of a hero for Sony, performing superbly at both 32in and 40in sizes, the larger of which walked away with our Product of the Year Award in 2010.

The 32in was only beaten by a more expensive Panasonic, and now it can be found for even less money.

It's what's inside that counts
Don't be perturbed by the design; this is a decidedly uninviting-looking set.

Like others of this size, it's from the budget range and is all about maximising performance per pound, so the case isn't the slimmest and the remote is an old-style Bravia offering.

On the inside, though, there's plenty to shout about – not least Sony's Bravia Internet Video service.

Connect the EX503 to your network, via ethernet or optional wi-fi dongle and you can access plenty of on-demand content including iPlayer, YouTube and LoveFilm. The brand new Qriocity service has been added too, giving access to on-demand music and movies (albeit at a price).

You'll find a Freeview HD tuner, too – shoved down the list of features on Sony's own website, which shows you how well-specified the company thinks it is – plus four HDMI inputs, PC, USB and component inputs and a digital audio optical output, to name but a few. DLNA capability rounds off an exhaustive set of features.

The TV tuner gets it off to a flying start, delivering the most realistic looking images, complete with expertly weighted colours, sharp edges and a picture that's free from any digital noise.

While we wouldn't be inviting our friends round especially to hear them, we're almost impressed by the speakers, too.

Other rivals deliver a more articulate and easy-on-the-ear sound though, offering adequate bass weight and clarity without harshness in the treble frequencies.

The picture takes a little tweaking to get perfect with DVDs, but we're then treated to a superbly insightful, textured image.

Watching Fargo, the growing tension on our hapless villains' faces is delivered lovely and detailed, while motion is handled smoothly too – we used ‘low' processing and ‘film mode 1'.

Absorbing high-def images
As you might expect, Blu-ray playback ratchets up the quality and shows that the Sony still has plenty left in its locker.

Again, it's the level of insight that stands out, making for a more involving, absorbing watch, helped by faithful, natural colours and masterful handling of light and dark scenes.

Sounds like something of an all-rounder, then. Yep, just a little: all the latest technology is here and it's matched by superb performance across the board. At this sort of price, it really is a no-brainer.