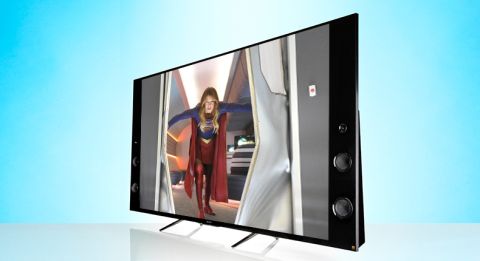 It is common practice in a fireworks display to hold back a little. That’s all they’ve got, you say, halfway through. That’s all they can do. Then they throw everything in and leave you with a massive finale. That’s pretty much the deal here.

Sony has had a tough year when it comes to TVs. Their 2015 range had been mostly good rather than great, and hadn’t received a single five-star rating.

But just when we are ready to count them out, Sony blows our socks off. The Sony KD-75X9405C is a huge success.

Did we say huge? We mean holy cow that is enormous. TVs are generally getting smaller and slimmer in an attempt to blend in with your living room, but Sony is having none of it. This is the big flagship and wherever you dock it will be the centre of attention.

This isn’t mere hyperbole. It measures 193 x 99 x 32cm, which isn’t far off the monolith from 2001: A Space Odyssey. You may need to knock a wall down. The 75in screen is capacious in itself, but the Sony KD-75X9405C also accommodates some proper speakers.

There are six drivers on the front, fitting beautifully into the glass. The woofers and subwoofers use the latest version of Sony’s ‘magnetic fluid’ speaker technology, which does away with the traditional rear part of a typical drive unit’s suspension to cut distortion. They use Mica-reinforced glass fibre cone, which is supposed to improve detail levels.

Thankfully, you won’t need a two-metre-long bench to rest it on. The TV’s feet can be positioned by the corners or close together near the centre of the screen. You will need a strong surface, however – it weighs almost 57kg and required two of us to set it up.

Let’s not mess about here: the Sony KD-75X9405C is stunning. The picture is every bit what you’d expect from a flagship television.

Out of the box, it is apparent that this thing excels in contrast – and area where many other 2015 Sony TVs faltered. We suspect this is down to the model’s direct LED lighting as opposed to the edge-lit system used on, for example, the ultra-slim Sony KD-65X9005C.

We’re dealing with fierce levels of dynamism. Bright scenes have no problem reaching retina-searing levels of luminosity, while shadowy scenes have perhaps the most impressive black depth we’ve ever seen on an LCD TV.

We’re not quite talking OLED levels of tenebrosity, but suddenly we find ourselves not missing the old plasmas so much. Local dimming is another strong point: the Sony easily juggles light and dark, with an impressive amount of detail at both extremes.

Making the most of this dynamism is the colour palette. This is one of Sony’s consistent strengths, but what you get here is highly accomplished. So subtle and natural is the shading that images burst with life.

Skin tones are rarely this convincing, especially in the awkward areas such as cheekbones and eye sockets. The whites could be a little purer, but now we’re just nitpicking.

MORE: Sales of 4K TVs hit nearly three million in the US

We’re also pleased to see a good degree of uniformity in the lighting. Our review sample didn’t show any evidence of light bleeding. Viewing angles are decent, too – you have to go quite wide before the image gets unacceptably washed out.

If you’re after high levels of detail – the biggest reason to get a 4K TV – you won’t be disappointed. Sony has traditionally been strong at clarity and definition, but this is something else. Load up House of Cards or Chef’s Table (in 4K on Netflix) and you get the sort of insight that lets you see how much make-up somebody is wearing. Is there a better reason to get into ultra high definition?

The Sony is great at upscaling too – no easy feat considering the size of the screen. Full HD is rendered with strong, definite lines. Spin a Blu-ray of Gladiator and the handfuls of dirt Russell Crowe likes to play with are afforded granular detail.

One thing to watch out for is the ‘Reality Creation’ feature, which has a tendency to articulate the noise in grainier sources. Just knock the feature down to around level 30, or turn it off altogether. Turn the brightness down a little as the out-of-the-box setting is a little intense.

You may as well tinker with the motion settings a little. The screen’s default performance is better than most, but it bears the extra customisation. We’d have minimal motion processing, because movements are smooth enough without much help. This really is a talented performer.

If you’re still bothering with it these days, this is an active 3D set. You get the usual issues of crosstalk, but it’s not a huge problem. The sense of depth is good, and the screen’s brightness successfully wards off the dimness of 3D glasses.

With all that hoopla about the picture, it’s easy to leave out the sound. That would be a shame, because the Sony sounds brilliant. As TVs became thinner over the years, so did their sound – but the Sony’s proper speakers make a huge difference.

They go properly loud without hardening up. There’s plenty of bass, enough that you never feel the need to add a subwoofer. Most importantly, the sound is tonally balanced.

There’s even a solid stereo image – no doubt aided by the TV’s ample width. If only more TVs handled sound this way.

A remarkable good sound and picture performance, then – and the interface is one area we expected to disappoint. This is because Sony uses Android TV, which so far has not been a patch on LG’s WebOS or even Samsung’s Tizen system. The problem had always been a lack of apps.

This is now no longer an issue, because Sony has successfully integrated YouView into the system. In case you’ve yet to experience it, YouView is a system that lets you rewind your programming guide. You can see what content you missed up to seven days ago and play it on the UK’s main catch-up apps.

Having integrated YouView, Sony is now armed with BBC iPlayer, ITV Player, All 4 (formerly 4OD) and Demand 5. Factor in the existing Netflix, Amazon Video and Google Play – that’s quite a haul. Just like that, Sony’s interface has gone from a desolate ghost town to a bustling entertainment hub.

Well done, Sony. More like this, please. The KD-75X9405C is a thrilling television in many ways, and thoroughly deserving of a five-star rating.

Yes, it is massive, but it does mean you’re getting a lot for your money. Even better is the price, which has dropped from over £7000 to under £6000. We’re certainly tempted.