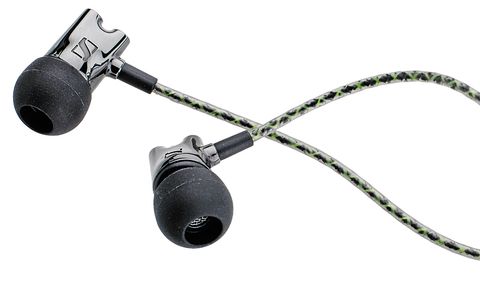 First things first: as you’ll have already noticed (and, most likely, already commented on), these Sennheiser IE 800 in-ear headphones cost £600.

The unavoidable initial response to this information goes like so: “how can a pair of earphones possibly justify a price tag like that?” – and that’s assuming you’re polite and not given to foul language.

Mind you, around the What Hi-Fi? Sound and Vision testing rooms we said something similar in response to the arrival of Grado’s £350 GR10s. And simple decency forbids us repeating what we said when AKG’s mouth-dryingly expensive K3003i in-ears (yours for £1000) showed up.

Yet both of these products made off with five stars. So there’s plenty of precedent for the IE 800s, although obviously at £600 a pair there’s no excuse for even the merest hint of a suggestion of a chink in their armour.

As you’d expect, Sennheiser is at pains to point out the numerous innovations incorporated into the IE 800s. And to be fair, these unassuming earphones are, relatively speaking, packed with high-end technology.

The extra-wideband (XWB) transducers, for instance, are (at just 7mm) the smallest currently available and promise distortion-free sound even at uncomfortable-going-on-dangerous volume levels.

Harmonic distortion levels are so low as to be (apparently) non-existent. Ceramic housings and dampened two-chamber absorbers also let you know that these small, unassuming-looking earbuds mean business. As if the price-tag didn’t shout that already.

While there isn’t much space to express the idea of premium materials, or painstaking construction or finish, the Sennheisers’ single-piece ceramic enclosures feel solid, and the relatively hefty cable resists tangling and transmitting noise.

Once in place (the IE 800s are supplied with five different-size ear adaptors and are simplicity itself to site comfortably and securely), the scope of the Sennheisers’ abilities is apparent from the get-go.

Try to rough them up with a listen to Califone’s Frosted Tips and they’re entirely unfazed: where authority and control are concerned, the IE 800s are simply unquestionable. Low-frequency stuff is delivered with speed, definition and superb tonal variation, and as you move up the frequency range the Sennheisers just get on with job of serving up top-notch fidelity.

Where midrange communication and articulacy are concerned, the IE 800s rank among the very best in-ear headphones we’ve ever heard. At the top end they attack crisply, grip transients fanatically and describe the beginning and decay of individual notes or hits with an attention to detail that borders on the fanatical.

Integration and timing are absolutely first-rate, dynamic headroom is considerable, and stereo focus and soundstaging are entirely lucid while, crucially, the Sennheisers maintain a completely neutral attitude to the music. They’re not disengaged or disinterested – just unwilling to impose themselves.

Change the emphasis somewhat with a switch to Charles Mingus’ Pussy Cat Dues and the IE 800s prove supremely adaptable. Their mastery of timbre is even more apparent here, as is their ability to organise and delineate a soundstage with complete coherence.

Such is the Sennheisers’ manoeuvrability, eloquence and integration the interplay between the musicians is not only apparent but obvious. Where sheer musicality is concerned, the IE 800s make a pretty much watertight case for themselves.

No matter what gets piped in (and we listened to everything from LCD Soundsystem’s Losing My Edge to Django Reinhardt’s You Rascal You plus many points in-between), the Sennheisers pipe it out again intact and unmolested.

They’re revealing of file quality, but won’t make a meal out of it. Use them with a poor source, though, and you simply won’t hear what they can really do. Rubbish in rubbish out, as the saying goes.

Which brings us to the one glaring problem among all the eulogising of the IE 800s’ numerous and prodigious talents: the source player. As in-ear headphones, their whole purpose is surely to make the best of your digital music while you’re on the go – and in our experience the portable players that demand/deserve/require headphones as capable as these are few and far between.

To all intents and purposes, these Sennheisers are waiting for hardware that doesn’t really exist at the moment.

None of which alter the facts, though. The Sennheiser IE 800s are superbly made, brilliantly accomplished in-ear headphones. If you can justify the cost, and if your source player can justify it too, we think you’d be hard-pressed to find better. At any price.