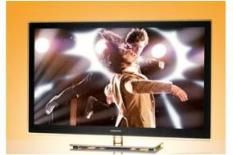 Best 3D TV, Awards 2010. If you want a big screen packed with up-to-the-minute features, this Samsung is an awful lot of telly for the money

We've had a good long look at the Samsung PS50C6900 plasma. It arrived just in time to find itself flung into a Supertest in November, and emerged from that with enough credit to make off with an Award in 2010.

Now it's back for the third time running – and its grip on all five stars has held firm. Never a dull moment, eh?

An embarrassment of tech riches
In many ways it's as likeable as ever. It looks good, for a start – the bulk of a 50-inch TV (even a slim one) can be tricky to disguise, but the PS50C6900 isn't about to ruin your carefully decorated interior.

It has a specification list that just goes on and on, too. Samsung's excellent Internet@TV service is available via Ethernet or wirelessly (the dongle for which will set you back the thick end of £50), and the screen will also stream from your own media.

It has a pair of USB ports alongside four HDMIs and plenty of lesser connectivity, too. Freeview HD reception is also on board. The C6900 shares its remote with other Samsung models, and its excellent menus with all three of them.

As a straight-ahead television, the Samsung has plenty of positives: TV pictures are vibrant and clean, with commendably smooth edges and reasonable depth to black tones.

Tough motion can upset it
There isn't quite as much detail revealed in those blacks as some of its premium rivals, though, and the toughest motion can disrupt the C6900's serenity. Skin-tones are a little overly healthy, too – some faces look they've either spent too long in the sun or too long at the bar.

Upscaled DVDs get a better grip on motion, mind you, and while skin-textures and tones can look a little soft they do at least have more natural colouring. The whole colour palette is enjoyably neutral, in fact.

Spared the effort of upscaling lower-resolution content to fit its screen, the Samsung looks altogether better realised when showing a Blu-ray of Gran Torino.

Black detail could be a little better, but otherwise this set turns out a really watchable performance by the standards of the priciest TVs at this size – where colours, contrasts and motion are concerned, the C6900 displays the sort of assurance that won it an Award in the first place. Skin-textures (and Clint has a lot of them) are convincing, while the lack of scale or weight to sound should come as no surprise at all.

If a big, do-it-all screen at a tempting price fits your needs, the PS50C6900 still demands your attention – it just doesn't have the field all to itself any longer.