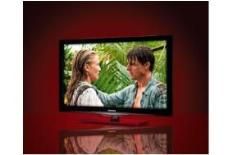 Another year, another budget belter from Samsung

Samsung has a tendency to heavily push its most high-end and advanced TVs, but leave its more affordable models to one side.

There's plenty of sense in that approach, of course, but over the past few years we've often been blown away by its budget and mid-range options, which is why we've gone out of our way to source one.

Online services abound
Not that that's overly evident in the design or features, mind: it's not particularly thin, but the ‘C650 looks pretty smart with its glossy, red-tinted finish, and it also boasts a spec that includes 100Hz motion processing and a very comprehensive suite of online services.

Select the Home mode when you first install the TV, and very little additional picture calibration is needed.

A couple of notches down on the backlight to get rid of a faint blotch on the bottom-right of our review sample was pretty much all that was necessary before we popped-in the Up in the Air Blu-ray.

And the picture? For the money, absolutely brilliant. The rather awkward disco scene proves the Samsung has plenty of contrast, as it produces realistically-deep blacks at the same time as bright, flashing lights.

It also has all the insight necessary to reveal the rather geeky debauchery that takes place as the convention attendees get more inebriated.

It's an enticingly vibrant performer, too, although compared to the best it can let a smidge too much red into skin tones.

Switch down to a standard-definition DVD and the results are similar, although it's worth turning off the Motion Plus feature to avoid any unnaturalness.

You'll have to make do with a touch of smear if you do, but that's the better compromise in our book, and the overall contrast and crispness are very good.

Copes well with broadcast TV
The overall vibrancy of the picture also works well with Freeview, especially when it comes to the bright images of BBC HD, but it can be pushed a touch too far by something particularly garish, like bonkers kids' show ZingZillas.

Of course, if discs and Freeview tuners are just too last-decade for you, you can always switch to BBC iPlayer or LoveFilm on Internet@TV, both of which offer on-demand content.

The quality is only standard-definition, but the Samsung does a good job of upscaling it fairly cleanly.

Finally, there's the sound, which, although thin, is rhythmic and clear for the class and rounds out a performance that easily outclasses the asking price.