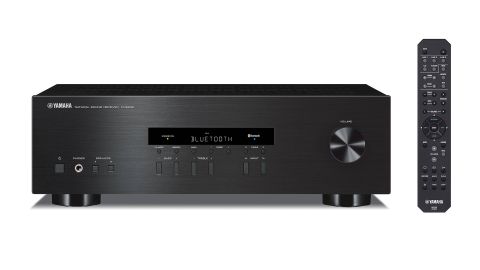 For a while, we’ve struggled for any great wealth of budget stereo amplifiers we can wholeheartedly recommend. Yamaha appears to have taken it upon itself to expand that list in recent months, and its latest integrated amplifier, the R-S202, is another welcome example.

In most other situations the term ‘budget’ might signify a stripping back of features or a scaling down of the attention to detail, but the R-S202 is only budget in terms of its price tag.

Where the R-S202 does have mass-market appeal, however, is in its range of features. Bluetooth is arguably the most important one, meaning you only need to add a comparatively priced and comparably talented pair of speakers to create a basic, but worthy, system.

There is also an FM/AM radio tuner built-in and, on the UK model we tested, DAB digital radio too. The UK version features a DAB tuner and adds a ‘D’ to the model name, but that’s the only marked difference between it and the US version.

Yamaha has also included two sets of speaker terminals, allowing the R-S202 to be used to power two separate systems. These will take only bare wire, however. As well as saving on production cost, it means you don’t have to spend on terminating speaker cable with banana plugs or similar, though you are limited to thinner cables.

Those speaker outs sit just to the right of four stereo RCA inputs and one line out on the back of the unit. The front, meanwhile, is reserved for the volume dial, a strip screen displaying input information, headphone output and buttons for switching between speakers, inputs and tweaking bass and treble response.

If that’s the kind of build and feature set you’d expect from Yamaha, the R-S202’s sonic performance will be equally familiar. It is a marginally more forward presentation than we heard from the similarly-priced A-S301, but it retains that even-handed, pleasantly mellow bent without colouring the music too much.

Its main competitor, Onkyo’s A-9010, has a treble that is easily provoked with the wrong partnering electronics. However, the R-S202’s softer approach means pairing speakers and sources should be a breeze.

The R-S202 doesn’t quite snap in time or make the absolute most of dynamic shifts in the same way the A-9010 does, but the latter is a formidable opponent whose considerable talents should not serve to belittle Yamaha’s gallant attempt.

While it doesn’t quite harness the same excitement as the Onkyo, we are happy listening to the R-S202 throughout our testing time. There’s enough detail to pique our interest, and that extra punch – especially with a little more bass dialled in – makes this Yamaha worthy of being turned up loud.

If the R-S202 offered a little more in terms of timing, dynamics and general organisation, we’d be tempted to give it a five-star review. But the fact it receives four stars doesn’t automatically mean that Onkyo’s A-9010 is the better option for everyone.

So, the R-S202 doesn’t just expand our list of recommended budget amplifiers, it also represents a true alternative to everything else on that list.