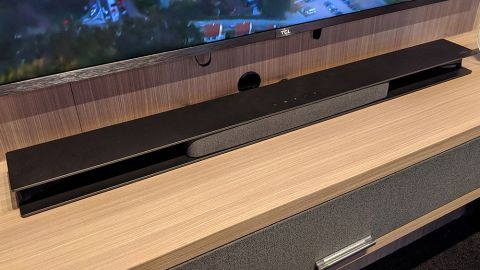 The TCL Alto 9+ is a feature-packed soundbar offering Dolby Atmos and Roku TV connectivity at a relatively low price. And all that alone makes it a product of note at CES 2020.

It's clear that Dolby Atmos no longer requires you to fill your room with hundreds of speakers, with the next-gen, object-based audio technology now wriggling its way into products of all shapes and sizes, most notably soundbars – and there are plenty of Atmos soundbars on display at this year's show.

The Alto 9+ is set to retail for "around $400/$500", according to a TCL spokesman, and this product was described as a "prototype", so could yet go through some changes, but it seems clear it's going to be one of the more competitively priced Atmos soundbars.

Rival models such as the Sony HT-ST5000 retail for around three times the price, so it's clear we might have to manage our expectations in terms of sound performance.

And that affordability comes at a cost in terms of drivers, with this TCL offering fewer speakers than rival premium Atmos speakers.

The TCL Alto 9+ is a 3.1-channel soundbar, with a centre channel and side speakers, plus a wireless subwoofer. It can be wall-mounted or placed in front of your TV, where it cuts a fairly wide figure - and distinctive, thanks to the design of the centre speaker.

TCL uses backward tilted speakers on the side of the Alto 9+, alongside what it calls RAY·DANZ Technology, which help to create the wider soundstage and deliver the Dolby Atmos audio. And with relatively few speaker drivers, that tech needs to do a lot of work to deliver something approaching true, room-filling Atmos surround sound.

As well as Dolby Atmos support, this TCL soundbar is certified Roku TV Ready. Plug your Roku device into the HDMI port and you can control your whole set-up with a single remote.

The sound bar is also compatible with Chromecast and AirPlay 2, allowing for iOS and Android phones and tablets to easily stream content straight to the Alto 9+.

A busy show floor is never an ideal place to demonstrate audio but TCL had done its best, giving the Alto 9+ a dedicated booth with a ceiling, which is necessary to get the beauty of the Atmos surround sound and height effects.

As noted earlier, this soundbar has far fewer speakers than most Atmos 'bars on the market meaning they need to work extra-hard to really deliver that true surround sound.

We listened to the oft-used Dolby Atmos leaf demo clip , and sure enough the leaf in the wind went some way to swirling around the small booth as it should. We're not sure how well it will fill larger rooms but it was clear the directional drivers were capable of going some way towards the sides of the room and ceiling.

The wireless sub is a decent size and ensured plenty of bass was in the mix, giving the overall sound a solid balance and avoiding the harshness often associated with budget soundbars.

You get what you pay for as the old adage goes and we would be surprised if this Atmos soundbar can get close to the performance of those at two or three times the price.

But at around $500, offering some semblance of room-filling surround sound, and with good connectivity - Roku TV Ready, AirPlay and Chromecast - it certainly offers value for those in search of a spec-ticking TV speaker. We're just not sure it will do justice to the original Dolby Atmos promise.