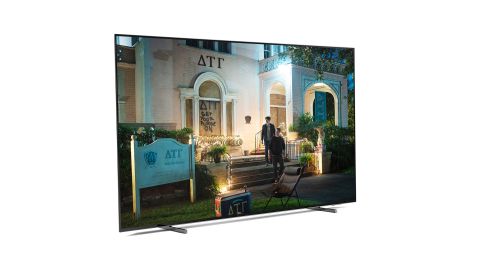 If you aren’t improving, you’re falling behind. It’s an adage you can apply to anything competitive, and the world of flagship TVs is nothing if not that. The Philips 55OLED804 is a top-of-the-line 2019 OLED that’s arguably a little too close in performance terms to its excellent predecessor.

The main upgrade is the P5 Pro chip, which brings with it a host of picture processing improvements. There’s also support for all the major HDR standards as well as added smarts with voice control via Google Assistant and Amazon Alexa, and an updated Android 9.0 operating system.

Will all of that make for a significantly better set than last year and, if so, how will that stack up against a competition this time around – a competition that has managed to evolve?

The Philips 55OLED804 looks every bit the part for an OLED TV – super-thin panel, check; minuscule bezel, check; tasteful stand; check. Those looking to wall-mount will need to accommodate an object measuring 123cm wide and make sure that their bracket and wall can handle a weight of 22.5kg.

One great reason to get it up nice and central is, of course, Philips’ trademark Ambilight system. It’s a TV lightshow technology that the company uses to create an extra special sense of cinematic viewing. Three rows of back-firing LEDs along the edges of the panel change colour to match the colour of the image on the screen. The effect is to extend the glow of the picture.

If you prefer, you can also set Ambilight to change to music you’re playing or any Philips Hue lighting you have. Not everybody likes Ambilight, but it’s definitely something we appreciate.

Around the back, you’ll also find as full a set of ports as you’ll need. This includes two USBs, four HDMIs and an optical audio-out. You’ll also get a good look at the 2.1 speaker set-up too with its 50W of power. There’s Dolby Atmos processing, should you link it up to some external speakers with Atmos support. As for HDR, it’s all bases covered with Dolby Vision, HDR10, HDR10+ and HLG.

We switch on to the Android TV home screen. More manufacturers have switched to Android in 2019 and while it’s not the best UI around, it could certainly be worse. It’s well laid out and easy to use. The downsides are that it’s missing a few key apps, including Now TV, All 4 and Apple TV. There’s also the issue that it can get in the way of the manufacturer’s own menus, which need to work alongside it.

In this case, it’s actually far better than the Philips UI area, which could benefit from a bit of a rethink. There are a few too many modes, some of which sound all too similar – such as HDR Perfect and Perfect Contrast – and often they don’t make any obvious difference to the image. ‘Keep it simple’ might be a phrase best remembered for next year’s model.

Fortunately, the remote control is good, if not as stylish as the competition. It has plenty of direct links to apps, the Ambilight settings and relevant areas of the UI, and we do like the full QWERTY keyboard on the back.

We turn to Harry Potter And The Half-Blood Prince in 4K to enjoy some of those deep blacks that OLEDs can produce. The overhead shot of the Hogwarts Express cutting through the Highlands is a thing of beauty. There’s a wonderful sharpness and detail to the heathland. It’s punchy, the colours are certainly vivid and, yes, as expected, the blacks are killer deep.

Pitch-coloured rivulets work their way through the orangey-brown moors and meet into pools of abyssal darkness. This is what OLEDs do best and the 804 certainly hits the mark. But that’s not what we see onboard the train itself as Harry makes his way up the carriages to spy on Malfoy.

Black as the shadows that our hero hides in are, there’s not an awful lot in the way of dark detail within them – it’s a 0-100mph affair from light to dark without too much in between. It’s something a few of 2019’s best OLEDs have improved upon, and the Philips seems to have been a little left behind.

We drop down to SDR material with X-Men: Days Of Future Past in Full HD, giving us another opportunity to marvel at how well modern 4K sets can upscale. The details on Mystique’s skin are superb. It would be easy to walk into the room and mistake the footage for 4K at a glance.

But, once outside in the jungle scene, as the blue baddie rescues fellow mutants from the US army, we get a glimpse of another area where this Philips falls just short. While those colours are vivid and punchy, they’re not quite on the money for naturalism. We push the intensity up and down, try balancing the colours slightly differently, toggle the TV’s colour enhancement modes and different brightness settings to get it to look right, but this set just hasn’t got it in the locker.

There’s a slight chemical edge to the tones of the palm leaves in the wide shots and, while this TV can get away with it in a film with a heavy grading, such as the Potter movie, more realistic palettes come off slightly unworldly.

It’s a pity because in many other areas of image quality, this panel excels. Its ability to handle contrast is right up there with the very best. We’d like to see more granular control of the motion handling options, though. Those available make the image look overly processed, even on the lowest setting. We decide to leave the motion processing off and live with the small amount of judder present.

If you’re spending this much on a TV, we’d recommend buying some external home cinema sound to go with it. If 5.1 is out of the question, then there are some excellent soundbar options to choose from at a good range of prices.

Either way, fortunately the Philips 55OLED804 is a decent TV for audio. It doesn’t give you the biggest sound in the world, nor the best spatial soundstage either, but it’s generally balanced and clear. It doesn’t destroy dialogue or skimp on the soundtrack.

Listening to the scene in Half-Blood Prince where Dumbledore and Harry find Professor Slughorn hiding in a muggle house is a good example. With the Philips Clear Voice setting switched on, voices are easy to hear and still maintain plenty of dynamic variation.

When Dumbledore uses magic to repair the ransacked house, the riot of noise is well handled. There’s good detail as we hear the splinters of glass reform into panes and some weight as floorboards and furniture reform. And each time a record or picture frame whips past us, there’s an appropriate, if not entirely room-encompassing movement of the sound.

While this set doesn’t fire sound out quite as well as the LG C9, it definitely has a better overall sonic performance.

So, it’s a solid four for this Philips OLED TV. The critical bottom line is that the competition has become a little more sophisticated - and cheaper too.

If Philips can up its colour game, improve motion handling and squeeze some life into those shadows, then it should be right back up there for OLED in 2020 – provided its rivals don’t move even further ahead.