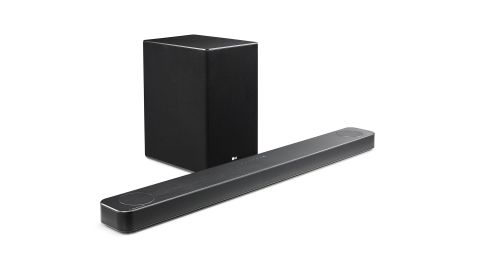 In the AV world, it is a truth universally acknowledged that technologies become more accessible the longer they have been around.

Take Dolby Atmos, for example; having started life in cinemas and then as a high-end speaker package solution, the premium surround sound format introduced itself to upmarket soundbars a few years back and has already trickled down into much more affordable propositions, such as this LG SL8YG soundbar. The question is, does the technology belong here?

We hook the SL8YG up to our LG OLED65B9PLA and Oppo UDP-203 4K Blu-ray player via HDMI (the LG also has optical and USB sockets) and settle into Guardians of the Galaxy Vol. 2 on 4K Blu-ray. It isn’t long before we decide that, yes, Dolby Atmos does indeed belong here.

You shouldn’t expect the kind of 360-degree presentation offered by an Atmos speaker package, nor the immersive presentation delivered by higher-end soundbars containing loads more speakers (the Yamaha YSP-5600 and Sony HT-ST5000, for example), but LG’s 3.1.2 speaker and wireless subwoofer configuration does a good job of spreading Atmos soundtracks far and wide (and, to a lesser extent, above).

The sound of spaceships extends beyond the left and right edges of the 65in TV to which it’s connected, and while the soundfield doesn’t quite reach the ceiling, there is more height here than you’d get from a standard, forward-firing alternative.

There’s also a sense of scale and immersion that you get from the Atmos soundtrack that you don’t get from the standard (DTS-HD) version also contained on the disc, proving the LG is playing to the extra information offered by Atmos. Add LG’s optional SPK8 rear speakers, sold separately for £149 ($180, AU$199), and we believe you’d get a convincing surround sound experience.

Unfortunately, though, that’s the LG’s sonic highlight by quite a long mile. While the SL8YG is a clear step up from our reference TV’s built in speakers in terms of clarity and detail – you can more clearly hear sounds that are barely discernible or even absent through the TV, such as computer noises and the echo around voices – it doesn’t put in the sort of performance we’d expect of even a soundbar as affordable as this.

That’s mostly down to a limited dynamic range that doesn’t make for a very exciting overall performance. Gunfire doesn’t punch out of the soundfield as it should, and the famously upbeat ‘80s score sounds a little lacklustre in the background.

To some extent the SL8YG's prominent bass provides that cinematic thrill you expect when you watch a blockbuster, but while it delivers proper floor-shaking thud when the ship crashes and skids along the ground, the sound isn’t particularly impactful or defined at the bottom-end.

The woofer sounds a little out of touch with the bar, too, sacrificing cohesion and almost acting like a fog over the rest of the frequency range. You certainly don’t need to apply the ‘Bass’ mode. In fact, we’d keep it on the most tonally pleasing ‘Movie’ or ‘Music’ modes, flawed though those are.

And, while there’s enough solidity and insight behind the midrange for voices to be coherent and expressive, a lack of warmth means that they can sound a bit hard when the volume is pushed.

The Award-winning Dali Katch One, which is admittedly pricier than the LG, has a preferentially rounded balance. What it lacks in scale and bass volume compared to the LG, it makes up for in considerably more expressive dynamics and insight. Its compelling performance lays bare the uninspiring nature of the LG’s sound.

Ultimately, its uncompetitiveness in some sonic areas undermines what is essentially a decent depiction of Dolby Atmos in an affordable soundbar.

On the one hand, we’d expect a higher level of performance from a product with involvement from high-end hi-fi brand Meridian but, on the other, this isn’t the first time we’ve been less than enamoured with an LG and Meridian soundbar collaboration.

While the small size of the SL8YG’s drivers is no doubt partly to blame for its limited dynamic range, that has at least allowed LG to create a compact bar that’s shallow (12cm) and short (5.5cm) – the ideal design for placement under a TV. At 106cm wide, it’s about the width of a modern 49in TV and will also fit very neatly beneath a 55in or 65in model.

The two upward-firing Atmos speakers are nicely integrated into the bar’s sleek aluminium chassis, and the LED text display that beams centrally through the front mesh grille is helpful for visualising volume, sound modes and inputs. Playing Atmos material? Pressing the remote’s information (‘i’) button will show you whether the LG is in fact receiving and playing an Atmos signal.

The SL8YG’s only average performance doesn’t just let down its practical, friendly form, it also undermines the exhaustive feature set on offer here. While the streaming abilities of many soundbars start and end with Bluetooth, the LG expands upon that with network smarts and hi-res audio support (up to 24-bit/192kHz).

Google Chromecast integration means owners can ‘cast’ music and video content from compatible apps (such as Spotify, Tidal, Google Play Music, Netflix and Amazon Prime Video) straight to the LG, providing it is on the same wi-fi network as your smartphone or other source. The Google platform is also handy for simply grouping other Chromecast-enabled speakers together for multi-room playback.

Built-in Google Assistant, activated by the supplied remote and the good ol’ utterance of “Hey Google”, allows voice commands to control certain aspects of playback such as volume and music selection, too.

Unfortunately, it’s a case of ‘same story, different soundbar’ here, with LG impressing with an ideal design and feature list but disappointing in the most crucial area - sound quality.

The SL8YG is certainly listenable and makes good on its promise to deliver more dimension with Atmos soundtracks, but we expect its sonic talents to spread further.

Sadly, that isn’t the case. LG’s middling form in this market continues. Perhaps in 2020 it will turn it around.