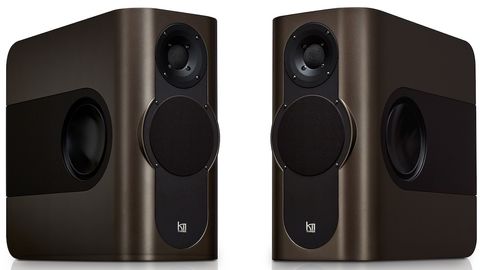 True innovation seems to be a rare quality in speaker design. It’s such a mature sector that any advancements tend to be incremental and usually come from the use of more modern materials and better analysis software than any fundamental shift in how things are done. Most speakers of today would be entirely familiar to an engineer working in the 1960s. But not Kii’s Three.

The Three may be Kii Audio’s first product, but the people behind the brand have plenty of experience in pro audio and electronic design, and it shows in the sheer ambition of the product. This is about as sophisticated a speaker design as we’ve had in our test room, and that says as much about Kii’s ambition as it does the conservative nature of the industry at large.

Packed in each compact clamshell cabinet – the Threes measure just 40cm tall  – is a 25mm dome tweeter, a 13cm midrange and no fewer than four 16.5cm bass drivers.

Kii isn’t keen on giving out exact details on the drive units, so we can’t tell you what the cone materials are, though we would guess the bass drivers probably use aluminium diaphragms.

Why the secrecy? The company feels such detail may prejudice people into expecting a certain type of sound and doesn’t want that to overshadow all the other clever engineering involved. Kii simply wants people to judge these speakers on listening rather than on-paper specifications, and that’s just fine by us.

The Threes really are sophisticated boxes, crammed full of tech. Each of those six drivers are driven by a dedicated 250W Ncore Class D amplifier module and controlled by arguably the most comprehensive DSP (digital signal processing) we’ve come across in any speaker. There’s also digital-to-analogue and analogue-to-digital circuitry in each enclosure.

The Three’s fully active configuration allied to the extensive DSP (digital signal processing) means that Kii’s engineers can control the behaviour of the drive units to an impressive degree. They can govern the speaker’s low frequency dispersion, the time alignment between the drivers, the overall tonal balance and offer room boundary compensation.

This DSP also allows Kii’s engineers to ensure that the drivers are never over-driven, so minimising the potential for damage, even at the high volume levels these standmounters are capable of.

Of the DSP’s controlled parameters, the ability to control the low frequency dispersion grabs our attention. The use of bass drivers on the side and rear of the cabinet is not just a way of getting more bass from such a compact box; it’s there so that Kii can use some clever phase processing to control the way bass frequencies are propagated into the room.

By shaping the dispersion pattern at these frequencies, the Three can be made far less sensitive to the listening room and placement relative to walls than conventional designs. Add the ability to optimise tonal balance through low and high frequency contour adjustments and you have a speaker that can perform close to optimally in just about any room over a wide range of positions.

Given that the listening room tends to be arguably the biggest influence on the performance of a speaker, this degree of independence from it makes the Kii Three unique in our experience.

Use the Threes alone, (without the partnering £1,495 Kii Controller) and they will accept a balanced XLR analogue signal from your current preamp or up to a 24-bit/192kHz AES/EBU digital feed through the same socket.

There’s a little switch next to the XLR input that toggles between the two. For some, this kind of minimalist set-up is just fine, but others will want to use a greater range of sources and this is where the Controller comes in.

This unusually styled digital hub is about the size of a small paperback and looks like a tabletop computer attachment rather than a typical preamp. It adds a volume control and more inputs in the form of optical (24-bit/192kHz compatible), coax (24-bit/192kHz) and USB (24-bit/384kHz and DSD128).

It connects to the speakers through a Cat 5 cable, sending the music signal to them and getting power back through the same link. There’s an additional Cat 5 link between the two speakers.

Using this controller also makes fine-tuning the Three’s performance easier thanks to a comprehensive set-up menu that gives access to every bit of the speaker’s extensive adjustability. Without it you have to use the fiddly slotted dials on the speakers to do the same thing. There’s potentially a performance gain in using the Controller too, as it avoids the extra digital-analogue-digital conversion required when an analogue feed is sent directly to the speakers.

The Three’s cabinet isn’t the usual wood-veneered MDF box either. It’s made of two pieces of injection-moulded polyurethane structural foam glued together and then attached to the aluminium panels that hold the electronics.

The appearance is modern, clean and classy in a way that evades most of the competition. There are two standard finishes – gloss white and graphite satin metallic – with the option of custom finishes at £1,000 extra per pair.

Being standmounters, you’ll need to provide the Kiis with supports. The Three’s unusual proportions mean there isn’t much choice beyond the £995 dedicated stands. They’re well built, twin-pillared metal affairs that incorporate a degree of cable management to keep things neat. The stand’s top plate fits rather neatly into an inset in the Three’s base with the speakers resting on strips of rubber.

Thanks to the controlled dispersion at low frequencies the Three prove astonishingly unfussy about placement. There’s enough in the way of tonal adjustment to fine-tune the sound for most positions, so they can sound good close to a wall or near a corner – positions that would leave most rivals sounding severely unbalanced.

That’s not to say a bit of care isn’t rewarded. While a close-to-wall position can be made to sound good, we ended up with them about 80cm into our listening room with a slight angle towards the listening position. This placement results in a wide and nicely focused stereo image balanced alongside even tonality.

These are impressively transparent performers so the spotlight is put on the source equipment. We use our resident Naim NDS/555PS music streamer for the most part, with our MacBook (loaded with Audirvana music playing software and plenty of hi-res music) driving the USB input of the Controller. A Cyrus CDi CD player is also pressed into service to work the optical connection.

In many ways the Threes sound spectacular. We can’t remember hearing speakers that sound so agile and precise, particularly at bass frequencies. All effort in controlling low frequency dispersion clearly pays off, giving the Kiis a stunningly clean and extended bass performance.

We wheel out our usual bass torture tracks – Massive Attack’s Angel and Hans Zimmer’s Like A Dog Chasing Cars – and the Kiis don’t flinch. They deliver an astonishing amount of bass for such small speakers, and partner it with plenty of punch. Along with all that muscle there’s a good degree of subtlety, with the Threes tracking the wonderful walking bassline of Van Morrison’s Moondance with delicacy and verve.

They go loud too. Kii Audio claims a maximum sound pressure level peak of 115dB, which is impressive and entirely believable if our experience is anything to go by. Turn the volume up and the Threes stay remarkably clean and unflustered, keeping obvious distortions to very low levels.

We move onto Beethoven’s Fifth Symphony and enjoy the speaker’s dynamic punch and ability to track a multitude of instrumental strands without confusion. The Threes sound brilliantly organised and have the composure to match even when the music becomes demanding. They can deliver a large-scale sound with an authority that’s well beyond most similarly sized rivals and with clarity most barely hint at.

Tonally they’re impressively even and neutral, and if things don’t quite sound ideal in your room there’s enough in the way of adjustability to balance things out. Unlike traditional analogue tone controls there isn’t a price to be paid in sound quality by using the Kii’s tonal DSP. Transparency and resolution remain of a high order.

These speakers set sky-high standards in many ways. If you’re looking for agility, precision, bass and plenty of loudness from small speakers that will sound good in just about any room, then you’ve found them. Perfect, then? Not quite.

The Kii Controller has many practical advantages and gives a notable increase in clarity over even very good preamps like our reference Gamut D3i, but using it does result in a loss of natural warmth and body to the sound. Instruments and voices sound thinner and less convincing despite the extra cleanness of the presentation.

But regardless of whether the Controller is used or not, the Threes fall a little short in other areas too. While brilliant at defining the leading edges of notes, the speakers don’t render the texture of sounds as well as we like, nor do they convey dynamic nuances with great conviction.

The combination of these things means that Nina Simone doesn’t quite touch our soul, even with a song as affecting as Strange Fruit, while Debussy’s Claire De Lune lacks a little of its usual magical draw. Add an inability to get our feet moving to Michael Jackson’s Don’t Stop Till You Get Enough thanks to rhythmic precision that isn’t truly spot on, and you have a speakers that are dazzlingly easy to admire but not quite so easy to love.

The Kii Threes remain an astonishingly ambitious design that succeeds in most areas. Indeed they set new standards in many of them while being about as unfussy about the listening room as we’ve ever come across.

Technically, they’re about as clever as speakers get. If high-end products are all about pushing the boundaries of engineering and performance, Kii Audio has easily earned a place at the top table.