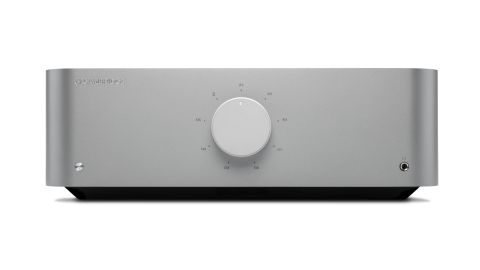 At this price, we can’t think of a more complete alternative than the Edge A. Cambridge has done a terrific job

What does Cambridge Audio do to celebrate its 50th birthday? It makes a high-end integrated amplifier like the Edge A, alongside a similarly ambitious streaming preamp and matching power amp.

We’ve already covered the excellent Edge NQ streamer (£3499) and Edge W power amp (£2499), but this integrated had eluded us until now. We’re glad we managed to get hold of it as the Edge A turns out to be a superb performer.

If the idea of Cambridge Audio making a £4500 integrated amplifier surprises you, it shouldn’t. The company was founded on premium products and, in the mid-1980s, built one of the most expensive CD players on the market, the two-box CD1 – it cost £1500 at a time when most premium machines sold for a third of that.

Within a decade, budget hi-fi formed the bulk of the company’s output and it remained that way for quite a while. But recent years have seen a determined move upmarket again. We’re now used to the company turning out class-leading premium electronics, such as the Award-winning CXA81 (£999) amplifier and Azur 851N (£1199) music streamer.

Capable as these products are, the Edge series is far more ambitious, as the price suggests. Cambridge could have gone for a stripped-out purist design for the Edge A, but that just isn’t the company’s style. It wanted to deliver high performance with practicality, and this integrated manages just that.

Apart from a phono stage, this unit packs in just about every feature we could reasonably expect. There are three analogue line-level inputs, including a balanced XLR option, alongside a quartet of digital connections.

It’s pretty standard to see the digital trio of USB, optical and coax, but we’re pleasantly surprised to find an HDMI ARC socket too. Cambridge recognises that some people use their stereo system to make their television sound better, and this is a neat way of making that happen.

As expected, the digital inputs can cope with most types of signals. The USB (type B) will support up to 32-bit/384kHz PCM and DSD256, for example. The coax is compatible with 24-bit/192kHz and the optical, as usual, takes that down to 24-bit/96kHz – all pretty standard numbers at this level.

We’re pleased to find that the company has also included aptX HD Bluetooth. It can carry signals up to 24-bit/48kHz, but this remains a convenience rather than a quality option, as the tech’s maximum bit rate of 576kbs shows. As a comparison, a CD has a bitrate of 1411kbs.

If the Edge A’s 100W per channel power output into 8ohms isn’t enough for you there are both single-ended and balanced preamp line outs so that you can add outboard muscle. The company’s hugely capable Edge W power amp would be the obvious choice.

Considering that the A’s power output doubles as speaker impedance halves, we can’t imagine too many people needing the extra amp, unless they have a large listening room or particularly inefficient speakers. There’s also a 6.3mm headphone connection on the front panel, which mutes the speaker and preamp outputs when connected.

Look on the Edge A’s back panel and you’ll find an RS232 connector for home install situations as well as a comms link that synchronises the Edge components to power on and off together.

You’ll also find a handy switch for an auto power-off function, so that if your amplifier doesn’t receive a signal for 20 minutes it drops to standby.

Take a look inside the amplifier, and it’s clear that Cambridge’s engineers have obsessed over the internals. For example, there are two toroidal mains transformers but they’re positioned in such a way that one cancels out any stray magnetic fields generated by the other – simple yet clever.

Elsewhere, the engineers have actively avoided capacitors in the signal path. Doing this reduces distortion and improves signal integrity. There are other unusual touches, such as the way the biasing on the output transistors is handled. Cambridge does it in a way that is claimed to offer many advantages of traditional Class A operation but without the high power consumption and heat generation. The result is something that falls between Class A and the usual Class A/B in terms of those drawbacks.

The company has done a fabulous job of the casework. This amplifier’s design is impressively slick and a world away from some of the more utilitarian-looking high-end rivals we see.

We love the curved corners and the way the top plate fits into place without the fixings being obvious. The main control dial mechanism is a work of art with its central volume control and outer knurled input selector ring. The input selector works with wonderful precision, but sadly the volume control feels a little vague in comparison. This is something we noticed on the Edge NQ streaming preamp too.

Still, when it comes to casework solidity, finish quality and attention to detail we haven’t come across an alternative that does better. Cambridge has even made the remote handset classier than the norm. The handset provided is nice to hold, simple to use and looks smart. We can’t ask for much more than that.

Any product at this level deserves a top-class system, We use an Audio Research CD9 SE CD player alongside a Roksan Xerxes/Artemiz/van Den Hul Frog record-playing package as our sources. The Cambridge doesn’t have a phono stage, so we put Roksan’s M-series Phono SE into service instead. Over the test period we connect a range of speakers to the Edge but stick with ATC’s SCM20s the longest, though ProAc’s Response D2Rs also work very well.

We’re big fans of Audiovector’s R1 Arretés standmounters, but despite on-paper compatibility, this pairing never quite sounds comfortable. Compared to other combinations, this one lacks dynamic subtlety, which is a surprise as we’ve heard the R1s sound excellent with other amplifiers. It just goes to show that there’s no alternative to actually listening when system matching.

The headphone output is tested with Beyerdynamic’s T1s and Grado RS1s. As expected, the amp has no trouble working with either.

Once up and running, it’s hard to escape the conclusion that the Edge A is a truly complete amplifier for the money. Play the likes of Hans Zimmer’s Gladiator OST and it generates a sound of huge scale and authority. The Edge is a composed performer; one that refuses to sound ruffled even when we listen to The Battle at high volumes.

The Cambridge proves impressively capable with this piece – huge dynamic swings are rendered with plenty of attack and it digs up a ton of detail that’s all organised into a musically cohesive whole. This amp can track low-level instrumental strands with ease thanks to a level of clarity and control that’s hard to better for the price.

Tonally, the Edge is nicely balanced. It’s got a slightly fuller and smoother balance than would be considered wholly neutral but it's not so far skewed as to be an issue. In fact, the balance chosen makes this amp relatively kind to poorer quality recordings, while allowing it to be transparent enough with those that are better.

Stereo imaging is nicely expansive. This integrated renders an expansive sound stage and populates it with well-defined and focused instruments. There’s a pleasing amount of stability here, and the amp locks sounds in place even when the music becomes demanding.

We switch to Nick Cave’s rambunctious Babe, I’m On Fire and the Cambridge is right at home. It’s an enthusiastic listen with plenty of rhythmic drive and punch. The production is as dense as they come yet the Cambridge maintains just the right amount of control without diluting the track’s frantic feel. That’s a neat trick most rivals can’t manage.

Turn the volume up and the Edge A creates a wonderful wall of sound that makes it virtually impossible not to get engrossed in the track. We play a great deal of music from the hauntingly beautiful Found Songs by Olafur Arnalds through Bruce Springsteen’s High Hopes set and Stravinsky’s The Rite Of Spring and at no point does the Edge A sound unconvincing.

It has enough in the way of resolution, tonal accuracy and stereo imaging to please those that like to analyse their recordings. Equally, if you just want to sit back (or get up and dance), given appropriate music and a suitably talented system, that’s exactly what this amplifier will allow you to do.

The story remains positive when we listen to the amp’s digital module. It’s a good-sounding DAC circuit that’s broadly equivalent to the better sounding outboard converters around the £1000 mark. We lose a bit of clarity and precision when compared to a class-leader such as the Chord Qutest, but by general standards, it’s a detailed and musically involving performance.

We try the headphone output and are pleased to report that it’s a good one. There may not be quite the expressiveness we hear through the speaker outputs, but there’s still enough in the way of insight and dynamic nuance to keep us listening.

If you’re looking for a fit-and-forget integrated amplifier, we can’t think of anything at this level that sounds better. Add the impressive build, smart styling and ample feature count into the equation and there’s no denying that Cambridge Audio has come up with a winner here.