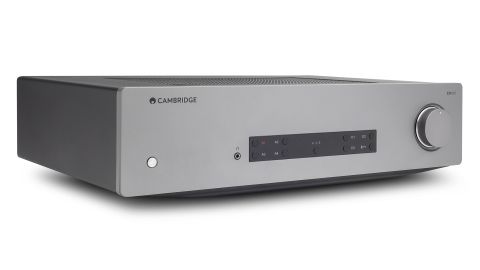 Class leaders are constantly being replaced in hi-fi, but rarely is it done so soundly as by Cambridge Audio’s CXA81 integrated amp

“Architecture aims at eternity,” said Sir Christopher Wren, architect of surely the world’s most famous rebuild after the Great Fire of London ripped through St Paul’s Cathedral in 1666.

Comparing such magnificent constructions with consumer hi-fi may be a crude parallel, but in rebuilding its 80W-per-channel CX series amplifier, Cambridge Audio has also designed something with the aim of offering that eternal quality.

The CXA81’s four-star predecessor wasn’t exactly in need of a ground-up reconstruction, but it didn’t stand so tall above hugely talented competitors in terms of features, design or sonic performance as this.

At a glance, neither this nor its 60W-per-channel CXA61 stable mate appear to have undergone radical changes since the series was first introduced five years ago; the Lunar Grey chassis and removal of balance and tone controls from the front panel are the only tweaks that are immediately obvious.

But though this new integrated amplifier’s basic analogue circuit remains unchanged, Cambridge Audio’s engineers have upgraded most of the op-amps in the signal path, as well as the capacitors in both the pre and power sections of the amp. The effect on performance is marked.

The CXA81 also houses a superior ESS Sabre ES9016K2M DAC and improved USB input that supports audio of up to 32-bit/384kHz and DSD256 quality, allowing you to make full use of its delightful presentation with high resolution files, while an aptX HD Bluetooth receiver is also built in for direct streaming from any compatible device at up to 24-bit/84kHz. Previously, a separate dongle at extra cost was required for any kind of wireless connectivity.

The reverse side of the amp reveals a healthy complement of physical connections to join that improved USB input. On the analogue side there are four RCA ins and a balanced XLR; Cambridge has decided to omit a phono input, but an outboard phono stage such as the company’s own Alva models would make a fine partner for those looking to connect a turntable.

Meanwhile, the CXA81’s S/PDIF coaxial input will handle files up to 24bit/192kHz, and its pair of Toslink optical connections take that up to 96kHz. You won’t find any digital inputs such as these on this amp’s main rival, the multi Award-winning Rega Elex-R.

In terms of outputs, Cambridge has included those for a pre-amp and subwoofer, as well as a 3.5mm headphone jack and space for two pairs of speakers, which can be played either separately or in unison.

Though the need to attach a separate Bluetooth dongle was marginally annoying, features and build were never the areas in which its forerunner, the CXA80, was lacking. While the impressive CXA60 won several What Hi-Fi? Awards, its bigger brother was never quite able to harness its extra power and translate it into as cohesive or expressive a performance.

Second time round, that is definitely not the case. There are many Cambridge Audio hallmarks here that make this CX amp broadly comparable with the tuning of its last iteration – only this time there has been progress in every regard.

From the opening bars of whatever piece of music we select, we’re greeted with the same powerful yet punchy, dynamic and astonishingly detailed presentation.

Confidence is key to the CXA81’s performance, hammering out staccato rhythmic patterns with assured conviction, snapping in time and allowing its expert handling of alternately loud and soft beats to lock in a groove. Above it, a full-bodied and expressive midrange deals out melodies that are given space to soar, yet still sound definitively part of a musical whole.

There’s a richness overall to the balance, too. This Cambridge is powerful and weighty in the low end, but lean and agile enough to dance around with the most excitable bass lines, while the treble is left plenty of headroom without sharpness or rough edges.

The CXA81 perhaps sounds a little forward, but its level of expression is such that it is sympathetic to more minimal, sombre recordings as well. Feed it a solo piano work or chamber quartet and it is only too pleased to show you its more caring, gentle side.

What really shines through though is a level of clarity that not only pips its rivals, such as the Rega Elex-R, but also makes them appear a touch cloudy. It is one thing beating this talented Rega amp for timing and dynamics, but to offer a more polished, insightful, even more mature presentation is a real turn up for the books.

The Cambridge Audio CXA81 sets a new baseline for thousand-pound integrated amps. It’s a rare product that has the ability to make us switch off our reviewing brain and simply let us be wowed by the music. We only get to experience a handful of such products during the course of a year, and with the way in which the CXA81 disposes of its rivals, it’s fair to say Cambridge has created one of them here.

And that’s only based on its sonic performance. Take into account its broad range of connections and features, and this is easily an amplifier that could last for as long as you wish – probably until you’re ready to spend a fair amount more on a significant upgrade.

Things often move fast in the world of hi-fi, but great sound never ages. If you have a system to make the most of the CXA81, it’d be folly not to scrawl its name at the top of your list.