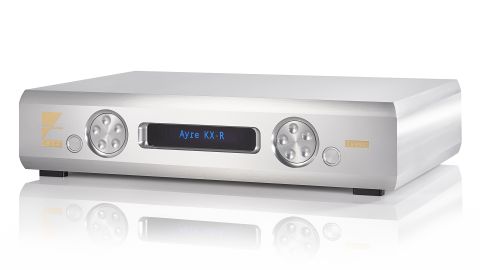 What is the best amplifier in the world – and does such a thing even exist? Much depends on the definition of what ‘best’ actually means, and the context in which the amp is used.

But if sonic honesty and engineering integrity are anywhere near the top of your priorities – and the hefty price doesn’t make you baulk – we think this Ayre pre/power pairing is in with a strong shout. It’s certainly the most insightful amplifier we’ve reviewed in years.

These Ayre products make a great first impression. Taking the KX-R Twenty preamp out of its packaging, we’re surprised with just how small and dense it feels. It’s packed into a relatively compact case that’s smaller than most budget integrateds, yet, at 18kg, is around double the weight.

That distinctive casework is machined from a solid billet of aluminium rather than a bent steel chassis with separate aluminium panels, as most rivals are. It gives this range-topping preamp a deeply impressive feeling of structural solidity.

The quality of fit and finish is excellent, just as the price point demands. Both of the control dials – one for input selection and the other for volume – work with pleasing precision and have a robust feel. Add it all together and it’s not unreasonable to expect these products to be working for decades to come.

The company provides a solid metal remote in the box. It’s a system remote so most of the buttons perform no function on the KX-R Twenty preamp, but it remains easy to use, if a bit clunky thanks to the ‘Tonka Toy’ feel of the buttons.

The VX-R Twenty power amp echoes the preamp’s luxury aura.  This is also carved from a solid billet of aluminium and features some elaborate machining for the top panel heatsink. Despite its relatively svelte dimensions – 9.5cm tall and 44cm wide – this is a 200W per channel powerhouse that doubles its output when the load impedance halves to 4 ohms.

It won’t have any trouble driving even difficult speakers to high levels. The VX-R runs hot though, so make sure you leave plenty of space around it for ventilation. Also, at 36kg, it needs a sturdy support.

Both the preamplifier and power amp are fully balanced dual-mono electronic designs. This is evident in the unusual positioning of the preamp’s connections, where left and right channel sockets are placed at opposite sides of the back panel.

At four each, there’s ample provision for single-ended and balanced analogue inputs, enough for even the most source-packed systems. The KX-R Twenty preamp only offers balanced XLR outputs though, and there are two pairs to make bi-amping easier.

As expected, the power amplifier’s connectivity is a lot simpler. Input is limited to a single pair of balanced XLRs and the speaker outputs are rather nice screw-down clamps that work superbly with spade connectors. As with the preamp, there’s the ability to link to other Ayre components so that they can communicate with each other and power up or down together as required or as the chosen input demands.

While the exterior of these products is impressive, it’s on the inside where Ayre’s attention to detail and open-minded electronic design comes to the fore. Take the base off either of these – that’s the way in – and it’s a joy to behold the obsessive care taken in designing the circuits and the quality of the components used.

The company has made good use of the machined casework by shaping it to separate and isolate the audio circuits, control modules and power supply sections from each other.

Ayre has long designed electronics that eschew overall feedback on sonic grounds and this pre/power continues that trend. It’s an approach that’s rare in the world of solid-state electronics because it’s difficult to implement properly. However, in our experience, it can work brilliantly when it is done well.

Maintaining signal integrity is a priority, the company even choosing the preamp display on the basis of the minimal electronic noise it generates compared to the alternatives. Consider that this display costs about ten times as much as those conventional alternatives and it's easy to see how build costs can rise exponentially when manufacturers chase ultimate performance.

The audio circuits themselves are kept as simple and short as possible to preserve the signal quality, and so reduce the risk of adding distortion or losing detail.

Even the volume control is unusual. It’s a resistor ladder design rather than a conventional potentiometer so that at any specific volume there’s only a single high-quality resistor in the signal path. The change is done using stepper motors and makes a lovely mechanical sound every time we switch volume. The input selection works with a similar method and sounds similarly special.

Unusually, a change in volume is accomplished by altering the gain of the KX-R’s preamplifier circuit rather than attenuating the input signal as most others do. This way the signal to noise ratio stays as high as possible regardless of how high or low the listening levels are.

Nobody thinking of buying an amplifier like this one should try to cut corners with source or speakers. Any shortcomings, particularly in the front-end, will be ruthlessly revealed, while sub-par speakers will simply short-change the amplifier’s talents.

We use our usual reference components for this review. Naim’s ND555/555 PS DR is the most musical music streamer we know and ATC’s venerable SCM 50s, while by no means a recent design, still serve as a model of honesty. We also add a Technics SL1000R turntable with a Luxman EQ-500 phono stage – the KX-R is a line-level unit only – into the mix, just for fun.

This pre/power combination is easy enough to connect, and our system is up and working pretty quickly once we realise that the power amp’s front panel LED also serves as its on/off switch.

That hefty price tag is quite a millstone for these products to carry, raising expectations to the point where nothing less than exceptional is acceptable. That this Ayre combo matches and then exceeds those expectations is a testament to the scale of its sonic talent.

While it doesn’t take long to recognize that this is a reference-quality amplifier, it takes a lot longer to pin down its sonic character. This Ayre pairing is the closest we’ve heard to that mythical ‘straight wire with gain’ ideal that hi-fi purists bang on about.

We start with Kind Of Blue by Mile Davis and fall under the pre/power’s spell immediately. Nothing sounds overstated with the Ayre’s tonality treading a confident path of tonal neutrality. At first, we think its presentation may be a little lean, with instruments perhaps lacking a touch of natural warmth and weight. That impression fades totally as the amplifier stabilises, leaving us with utterly convincing instrumental textures.

We would expect any amplifier at this level to dig up a lot of detail, and the Ayre combo duly obliges. What marks it out though is the ability to organize all that information into a convincing whole. Low-level information such as the studio acoustic is conveyed with confidence, while the leading and trailing edges of notes are delivered with unforced precision and grace.

While the likes of our reference Burmester 088/911 MkIII reference amplifier can set up a larger soundstage, the Ayres counter with a more focused image, one that is better layered and wonderfully stable. As we close our eyes, it’s easy to imagine being in the same studio as these jazz greats during recording.

Looking for weaknesses, we wonder whether the KX-R/VX-R pairing would prove a little too analytical for our tastes. Perhaps it was also losing something in the way of dynamic expression. We switch to Stravinsky’s The Rite Of Spring and find out that neither of these things are true. Here the amplifier sounds wonderfully responsive. There’s all the sonic drama we expect from this symphony, with the explosive crescendos delivered with surefooted confidence and epic force.

That 200W per channel rating for the power amp may seem a little modest at this price point, but the Ayre’s level of composure, scale and authority with this piece are outstanding. Perhaps just as impressively, this amplifier remains lively and entertaining at low volume levels, which speaks very well of its innate clarity and supremely balanced presentation.

You’ll notice we haven’t tried to break down the Ayre’s presentation in terms of tonal aspects such as bass, midrange or treble. That’s because it is so even and cohesive that it's hard to talk about these things as separate entities. Take it as read that the amplifier sounds proportionate and refined at all frequencies.

We listen to Jay Z’s Blueprint set and marvel at the pre/power’s ability to deliver propulsive rhythms with conviction. It punches hard where necessary, but also retains absolute stability through the rest of the frequency range, no matter how deep the bass or how brutal the transient. The presentation’s composure is terrific.

Importantly, despite all the analysis, this Ayre combo never forgets to entertain. It’s a fun listen that will have you digging out all your favourite tunes late into the night.

During the review sessions, we listen to a wide range of music from Beethoven’s bombastic Fifth Symphony to lively early recordings of Bruce Springsteen, and this amplifier never fails to shine.

This is a hi-fi component that is transparent enough to get out of the way and simply present the music as intended. If that recording isn’t great, you’ll certainly be told about it, but the Ayres aren’t in the business of highlighting flaws for fun.

There’s no denying that the KX-R Twenty/VX-R Twenty combo’s price puts it into dreamland territory for most, but that doesn’t mean it shouldn’t be celebrated for its extraordinary abilities. If you have the bank balance and an appropriate system, we can’t recommend this pre/power too highly.