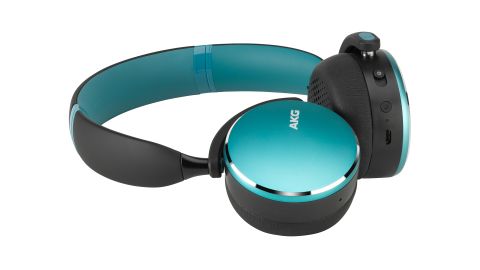 When we reviewed the AKG Y50BTs back in 2015, we were just as impressed by the superb wireless on-ears as by their wired AKG Y50 counterparts. “What you have here is a rare example of headphones that are equally excellent across audio performance, features, design and build quality,” we said.

Three years on and the Y50BT’s successor, the AKG Y500 Wireless, ups the game once more, thanks to a smarter design and a hugely listenable sound.

Gone is the large-lettered branding on the brightly coloured earcups; instead, the new Y500s come in shimmery green, blue, pink and black metallic finishes that look appealing.

The AKG logo is much smaller and subtler, and a much smarter design than before. The mix of aluminium and plastic leave the Y500s feeling sturdy yet lightweight, and the polished metal edges around the ear cups give the cans a touch of class.

The earcups themselves are soft, but clamp down on your ears a bit too tightly for our liking. It’s possible that they will loosen off over time and use. It’s not so bad that we want to take them off, but it’s something to keep in mind if you wear glasses. You can also fold up the headphones flat, bundling them up small enough to fit into your bag or a large pocket.

The controls under each ear cup have been redesigned, too. The power switch has a small blue LED to indicate when the Y500s are switched on and Bluetooth-connected to your smartphone. Subtle beeps indicate when your headphones are paired.

There’s also a button for AKG’s ‘Ambient Aware’ feature, which makes you aware of your surroundings while keeping your headphones on, so you don’t get run over in traffic or miss that train announcement. It works effectively, with music subdued and outside noise seeping in naturally.

On the other earcup, there’s a small button for playing and pausing music (double-tapping it summons your smartphone’s voice assistant) and a neat volume switch that you slide up or down. The controls are responsive, and it takes mere seconds to get used to these controls.

With a standard 3.5mm-ended cable included in the box, and a simple in-line remote for controlling playback, there’s the option to go wired. The Y500s can be charged via the supplied microUSB and battery life is a claimed 33 hours. That’s a big jump up from the previous Y50BT’s 20-hour lifespan – we didn’t need to charge the Y500s up during our week of testing.

Another extra feature is that the Y500s automatically pause music when you take them off. Put them back on, and music starts playing again. It’s a neat feature when it works, but we find it a bit hit and miss.

What’s clear right from the start is that AKG has opted for a more refined and grown-up sound with the Y500 Wireless headphones. There’s plenty of detail here, and every bit of it is composed and clear.

We play PJ Harvey’s Good Fortune and are met with a bold, solid delivery in a pleasingly spacious presentation. There’s ample heft and punch to the low end, edges of notes are crisply laid out, and her raw vocals are projected with excellent clarity. The Y500s go comfortably loud, too – they never sound rowdy or unruly even when pushed to high volumes. If you want headphones that you can just put on, listen to and enjoy with minimum fuss, these are ideal.

Taut basslines and a confident handling of timing make Massive Attack’s Angels an enjoyable, if not overly demanding, listen, and the Y500s’ silky, crowd-pleasing character make them a more long-lasting listen – they’ll keep you bopping along to songs for hours.

AKG has opted for a more composed and polished presentation that sacrifices a touch of its previous dramatic and energetic flair, but that doesn’t mean these cans aren’t an exciting, involving proposition.

The Y500 Wirelesses are a bit more reined in than their predecessors in the way they handle subtle dynamics and rhythms, but they are well put together, with a level of clarity and organisation you won’t get in rival Bluetooth headphones of this kind and price.

Juggling good sound quality, clever features, durable build quality and attractive design in equal measure is no mean feat, but AKG pulls it off while making it look easy.

The Y500 Wireless headphones are hugely appealing to use and listen to – you won’t find a similar wireless headphone experience that wraps every element together so neatly at this price.