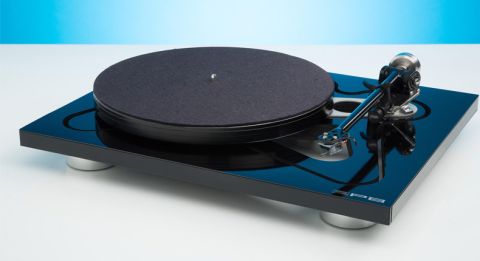 The RP8/Apheta is a terrific combination that sets sky-high standards for the price. Take care with system matching, though

The RP8 is the most ambitious Rega turntable we’ve ever tested.

Initially, it’s possible to confuse it for one of the company’s more modest offerings, but a closer look reveals there’s far more going on here than first impressions suggest. And we’re not talking about the gloss-black finish, either.

Rega has long believed in making its turntable plinths as light and rigid as possible. If the material is light it doesn’t store unwanted vibration energy as long, goes the theory, which is a good thing as far as turntable sound quality is concerned.

Over the years Rega has used plinths made of either MDF or chipboard covered with phenolic resin to deliver low weight coupled with rigidity, but in the RP8 the company has gone much further.

The central core of this deck’s plinth is made of light, closed cell polyolefin foam. This material took three years to develop to match Rega’s needs. As with the earlier designs, phenolic resin skins are added to both top and bottom surfaces to deliver higher rigidity and an element of damping. The result is a plinth – available in gloss black only - that is seven times lighter than the weight of the original Planer 3 plinth.

To improve the plinth structure even further, the company has added two braces specifically where it thinks rigidity needs to be at its highest – between the arm base and main bearing. Two different materials are used for the bracing; the top one is made of magnesium and the lower layer is phenolic.

By using two different materials for the bracing, each damps the natural resonances in the other, resulting in an immensely light, stiff and well-behaved structure.

And it goes further than just the plinth material. The RP8’s plinth is a skeletal design intended to be as small as practical. The smaller it is, the lighter and more rigid it will be – notice a theme here?

There is a slight issue when using the RP8’s skeletal form, caused by the foam core. The material’s edges aren’t smooth, and to many it looks unfinished. That’s just the way the material is, and Rega no doubt feels the advantages in terms of performance far outweigh the aesthetic shortcomings.

In addition, there’s a practical issue with skeletal decks and that’s how to incorporate a dust cover. While some hardcore purists may not care for such practicalities, for many people it matters. Rega’s answer is to build a surround for the skeletal structure resulting in what looks like a conventionally rectangular plinth; that way an entirely conventional lid can be used. Neat.

But look carefully and you’ll see that there’s an even gap between plinth and the surround, and the connection between the two is limited to thin rubber bands at each of the deck’s three feet. These bands make sure the spacing between the two parts stays even.

It’s a simple, but very clever arrangement. The lack of a rigid connection between the plinth and surround means that any vibration picked up by the lid – a significant issue that degrades sound quality by feeding mechanical energy into the record player’s structure – is minimised if not avoided altogether.

The only place that Rega likes more mass is on its platters, or more accurately at the rim of its platters. Mass helps to maintain rotational speed and irons out slight speed fluctuations; though go too far and you create problems with the main bearing design. As with everything in hi-fi, it’s all about finding the best compromise.

The hefty platter of the RP8 is a complex affair. It’s made up of three layers of laminated glass. The top layer is where the record sits and the subsequent layers are rings to focus the mass on the outer edge. The idea is to maximise the flywheel effect but keep the weight at the centre low.

This glass platter sits on an aluminium sub-platter, rather than the plastic versions used in the more affordable models. We try to spot some play in the main bearing, but can’t – it was as precisely machined as we’d hope for at this price.

A 24-volt AC motor spins the sub-platter though a twin belt arrangement. It’s controlled by Rega’s TT-PSU outboard power supply, which provides a clean, high-quality power feed. The power supply is fine-tuned to the specific motor by hand to maximise smoothness.

The TT-PSU also has speed control on it so you can swap from albums to singles (33 1/3 to 45rpm) at the press of a button rather than having to take the platter off and move the drive belt manually as with some rivals.

Compared to the plinth, other parts of the Rega may look more conventional, but that doesn’t make them any less interesting. The arm is an RB808. It’s handmade, with a great deal of care taken over the fit and tolerance of the bearings. Each bearing is individually selected to find the closest match to the relevant spindle. The bearing assembly is an all-new design too, majoring on – you’ve guessed it - low mass and high rigidity.

Even the arm tube is different from those used by Rega’s lesser arms. It’s been designed to redistribute mass and reduce resonances. Rigidity is also improved over earlier designs. Lastly, the RB808 uses high quality cabling with fewer joins in the signal path and better quality plugs.

The final part of the package is the Apheta moving coil cartridge. It’s the only moving coil cartridge the company makes, and is the natural partner for the RP8. While it may be tempting to save the £600 it costs and go for a cheaper alternative, we think it fits the turntable’s character really well, and is worth the expense.

As with all turntables, the RP8 benefits from careful placement. There isn’t much in the way of suspension, so performance will suffer if the deck is placed too close to the speakers or on surface that resonates strongly. Take care in this respect and this Rega will reward you richly.

How does the package sound? In a word, detailed. We’ve heard many turntables at this level but can’t think of one that digs up as much information as this one.

Play Mars from Holst’s The Planets and the RP8 excels. There’s power here coupled to wide-ranging dynamics and the ability to keep a tight grip on instrumental strands. Nothing gets confused as the piece builds to a crescendo.

Tonally, things aren’t quite neutral. The presentation is always just a touch lean and bright. Bass, while wonderfully taut and tuneful doesn’t quite have a full dose of weight to it. This lack of neutrality doesn’t go too far though, and certainly won’t be a problem unless other components in your system have harsh or aggressive tendencies.

The pay-off for that tonal balance is speed and plenty of it. This is a magnificently responsive sounding deck and delivers a sound full of energy and sparkle. If you want excitement, drama and the ability to just lose yourself in music we haven’t heard a better alternative.

The soundstage is good too. It’s stable, focused and nicely layered.

Switch to Michael Jackson’s Billie Jean and the Rega is right at home. It’s brilliant at latching on to that infectious rhythm track and thumps out the dense, undulating bassline with considerable skill. Jackson’s distinctive vocals are delivered with passion and superb clarity, and are in no way submerged by the packed instrumental backdrop.

We go through our collection taking in the likes of R.E.M.’s Automatic for the People, Miles Davis’s Kind of Blue and Bob Marley’s Exodus, and the Rega takes it all in stride, delivering a class-leading combination of attack and subtlety.

This is a hugely accomplished package that lifts a massive amount of information off the groove and organises it in a musically engaging way. It’s the kind of record player that keeps us listening, just wanting to see how good it makes the next record sound.

Rega is quite rightly recognised for the quality of its more affordable decks. The likes of the RP3 particularly have dominated their sector and our Awards for far more years than we care to remember.

But when the company really goes for it, shooting for the stars rather than trying to meet a price point, the results are spectacular. If you have the budget for the RP8/Apheta combination, jump right in. You won’t be disappointed.