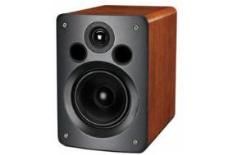 There's nothing wrong with being grown-up and mature: no-one wants the country run by adolescents, just as no-one wants policemen to look any younger. The problem comes when ‘grown-up and mature' is a conscious stance rather than a natural evolution, and that's what we think has happened to the Q Acoustics 1020is.

It sounds like some Q Acoustician has decided that the 1020is are going to offer a more considered, less flighty take on the 1010i sound – so we have a speaker that's had maturity forced upon it.

New tweeters
The 1020is have followed the same upgrade path as their little brothers – compared with the old 1020s they have a new tweeter, new crossover, and upgraded capacitors. They share the same integrity of build and the same excellence of finish, and even though they're significantly larger than their siblings, the 1020is are still usefully compact and still relaxed about room position.

A brief listen to Reverend and the Makers' The State of Things is enough to confirm the similarities and differences between the old 1020s and these reworked replacements. There's still admirable scale to the sound, and still a willingness to accept injudicious volumes, they still retrieve ample levels of detail and still offer a considered, well-integrated sound. And that new tweeter means the 1020is are now better voiced in the treble.

However, there's a lack of dynamic energy to their sound, a reluctance to attack material with the gusto it sometimes requires. The Q Acoustics don't lack low-frequency presence, but do without the grip and control that most rivals at this price.

It's a fine line between maturity and lassitude sometimes, and the 1020is aren't always sure which side they're on.