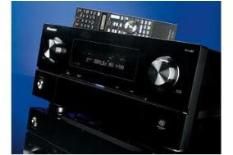 Damn that pesky recession. Not only are our personal finances taking a beating, the weakness of the pound is seeing the price of some home cinema products shoot up instead of down.

So can this glossy beast justify an overdraft extension? Most definitely. All of Pioneer's traditional strengths are present: its open, transparent delivery allows a fantastic amount of detail to leap into the sound field.

Excitement with X-Men
X-Men Origins: Wolverine certainly couldn't be accused of having the most delicate of soundtracks, but there are quiet moments where the amp takes great care to feed you the subtleties of what's on disc.

At the opposite end of the sonic scale, the Pioneer won't think twice about flexing its muscles. When the cooling tower crumbles from beneath Wolverine at the film's climax, there's real power and scale on offer. As the tower crashes, it delivers weight and control.

The amplifier's surround steering capabilities are sensational too. As Gambit fans out and fires up his deck of cards to launch at Wolverine, the sound effects sweep fluidly between speakers, before each card is hurled with impressive precision, force and a number of rapid-fire bass hits.

Pioneer has never been shy as far as features and connections are concerned, and the SC-LX82 is more than suitably equipped.

The rear panel is adorned with four HDMI inputs (an extra one lurks behind the front panel) and twin outputs for connecting to two different displays.

The iPod/iPhone-compatible USB input has become a regular feature of Pioneer's home cinema amps, and the connecting cable is shipped in the box. Networking functionality is included, as is DLNA certification.

We were slightly concerned that the SC-LX82's price tag might make it difficult to justify in a market that is overflowing with kit a couple of hundred pounds cheaper.

But the sheer ability of this amp is justification in itself. its blend of power, scale and subtlety is a pleasure to listen to – this is a definite contender for class-leading status.