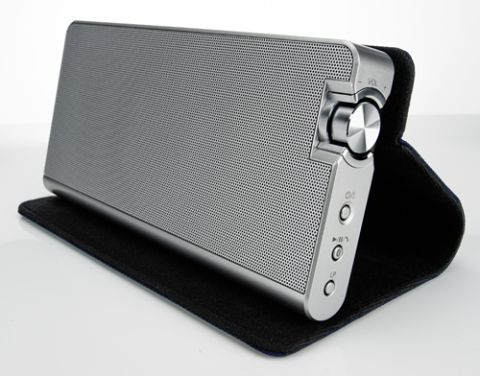 If it wasn’t for the frustrating cabinet vibrations, this elegant and subtle Panasonic would have been a serious contender

The SC-NA10 oozes class and subtlety. It’s a wonderfully refined, detailed and rhythmic wireless speaker, but with one flaw that stops it from going straight to the top of the class.

The entire cabinet vibrates, leading to a bloated, distorted bass that inelegantly sticks out from the rest of the frequencies.

It’s a real shame as, for the most part, this speaker is absolutely lovely to listen to. It sounds clear, open and articulate.

Stream David Bowie’s Sound And Vision over Bluetooth, and his voice is nuanced, expressive and packed full of detail.

The rhythm is lively and precise, and the guitar twangs sparkle without sounding sharp or bright in any way. There’s punch, weight and warmth – it’s mostly a musical and utterly captivating sound.

The dynamic highs and lows are conveyed with ease and composure, and it can go pretty loud too.

We switch to a wired connection, using the 3.5mm input to plug in our Apple iPhone, and the sound retains its sonic character.

It’s a touch tauter and cleaner, but it sounds just a little more spacious via Bluetooth.

There is, though, this glaring problem. Play Stevie Wonder’s Superstition or Big Bad Voodoo Daddy’s Mr Pinstripe Suit, and the deep basslines and drumbeats sound far too thumpy and out of sync with the rest of the frequencies.

It’s not a problem with the drive unit or amplifier, but the construction of the Panasonic’s cabinet that’s the issue here.

It resonates at the same frequency as the lower end, and it feels as if the 8cm passive driver is trying to burst out of the casing. The entire casing vibrates. A lot.

We’re disappointed, as this Panasonic speaker is excellent in every other regard.

That excellence includes the gorgeous finish of this small speaker. It’s a sleek shape, the silver aluminium finish is classy, and the control buttons are discreetly placed along the side.

The cover can be swapped for other finishes, and it looks smart. It also opens and folds into a nifty stand.

Technically, this speaker lasts for 20 hours – but that’s only when it’s in LP (Long Play) mode.

Press the LP button on the side, and you’ll hear a softer, less powerful sound that uses less power so that the battery can last longer.

You can connect to the SC-NA10 via NFC (Near Field Communication) and Bluetooth.

Simply tap your NFC-enabled device (Android or Windows) to the tag on the top of the speaker, or use the standard Bluetooth link (Apple). The Panasonic can also be used to charge your smartphone while playing music.

You can also download the Panasonic Music Streaming App and create playlists from songs stored on your smartphone, and there’s a built-in mic, so you can take calls and use the SC-NA10 as a speakerphone.

We’re equally smitten and disappointed with the Panasonic SC-NA10.

It shines above so many of its rivals (think Ultimate Ears Boom, Bose SoundLink Mini and Bayan Audio SoundBook) with its greater subtlety, clarity and rhythm.

It’s immaculately finished too, but the problem of that vibrating cabinet simply won’t go away.