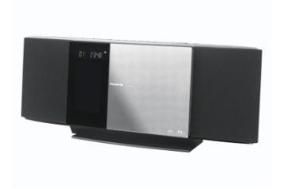 This all-in-one has funky enough styling, but the basics need more attention

It's always nice to see a company put real effort into producing something a bit different, and Panasonic has certainly done that with its SC-HC range of all-in-one micros.

Sitting one-down from the top of this range, the '30DB's USP is its two-way motorised panel on the front, which opens one way to reveal a vertical CD mechanism, and the other way to reveal an iPod dock.

In its neutral position, both your CD and iPod are covered by the front panel, the latter being visible through a tinted window.

The tint is quite dark, though, and makes it rather difficult to read the text on your docked iPod.

Ergonomic issues
And, if you're listening to a CD then switch to an already-docked iPhone, you'll probably find that it's locked itself while you've been away, which means you won't be able to access its menus without first re-opening the front panel.

Niggles aside, we rather like this approach. The unit's fairly slim, wall-mountable design makes for a funky look. Panasonic isn't concerned only with styling, though, and the '30DB combines two, full-range, bamboo cone drivers with two passive radiators to create what the company calls a ‘dynamic and clear sound'.

Playing The Road soundtrack on CD, we're prepared to agree with the ‘dynamic' part. We're not talking hi-fi quality shifts here, but the dinky unit has a good stab at conveying the ebb and flow of the mournful strings.

Decent weight and depth
The ‘clear' bit is a little less convincing, though; there's a degree of fogginess to the delivery that leaves the vocals of The National's Bloodbuzz Ohio sounding a bit heavy and indirect.

The Panasonic's a little less rhythmic and detailed than the Roberts Sound 43, but there's decent weight and depth, and treble is never harsh.

These traits remain when you switch to DAB, which means Absolute Radio is always listenable, while Radio 4 is extra soothing.

However, it won't work in low signal areas as effectively as some of its rivals; we think most people would prefer a telescopic aerial to the bundled wire one.

Frustrating display
The display also proves frustrating, with its short, single line of text cutting-off most of a station's name when you flick between them.

It can make finding the correct BBC channel, all of which appear as ‘BBC RADI', rather slow.

We appreciate the funky styling frills, but a little more attention to the basics may have reaped greater rewards.