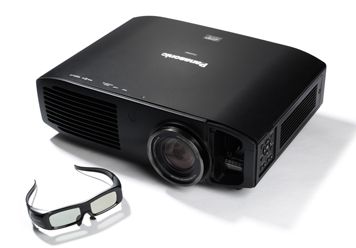 Best projector £2500+, Awards 2011. Believe the hype on this one: the Panasonic 3D projector was worth the wait

Ah, Panasonic 3D projector… we’ve been expecting you. For a company that’s been so impressive with its projectors over the past few years, Panasonic has taken its merry time readying its first 3D models.

And, fairly predictably, it might have been a wise move: most we’ve seen have struggled to completely win us over when it comes to 3D.

So here it is, the PT-AT5000E. The first thing you might notice is a subtle but not insignificant update to the design compared to previous Panasonic LCD projectors.

Generous set of connections
Previous generations have chosen function over form in a big way, modelling themselves on air-conditioning units and the like. Well, now imagine said cooling machine… but with rounded edges. This is that, and it looks all the better for it.

All the familiar connections are here: a generous three HDMI inputs, a component input and a smattering of legacy, lower-quality video options.

The 3D IR transmitter is built in to the projector but there’s also a terminal for connecting a standalone remote transmitter if you need a little more flexibility in terms of position.

Either way the projector syncs with Panasonic’s active-shutter 3D glasses
(the same specs as the company’s 3D TVs).

Near faultless 3D performance
At the top of Panasonic’s list of priorities for this 3D projector was the elimination
of crosstalk – when the images going to each eye appear separated rather than forming a solid picture.

The company’s proprietary 480Hz panel drive system steps up to do this. You can convert 2D content to 3D, adjust the depth-of-field of the 3D picture and take advantage of a picture-processing engine that’s previously proved so adept with 2D. A comfortable – and better – 3D viewing experience is the aim.

Flexible and easy to set up
The PT-AT5000E is simple to set-up thanks to powered lens and focus controls and, once that’s done, we were struck by the 3D quality.

There’s impressive depth and stability, and crosstalk is minimised more effectively than by any rival at this price. The 3D glasses are fine and keep in sync with the picture without issue.

Crucially, the strong 3D performance has an excellent 2D image on which to build. Thor on Blu-ray shows natural, realistic colours, yet is still capable of delivering bright and punchy scenes, while fast motion is delivered without blurring or judder.

Free of noise and uncovering bags of detail, we can find little to complain about. This could well be the best projector we’ve ever seen at this price.