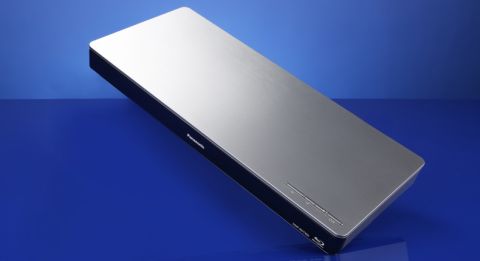 As talented with sound as it is with picture, a good all-rounder that’s hard to fault

Panasonic certainly knows what it takes to make a great Blu-ray player and the DMP-BDT460 holds plenty of promise for its 2014 range.

The 460 comes in at just under the top of the range, with advanced features and functionality, including 4K upscaling.

Despite its ubiquity at this price, we’re still not convinced it’s a ‘must-have’ feature, since you will need a 4K display to use it, all of which have built-in upscaling of their own (and usually of a better standard).

What really matters here is performance, and the 460 is an entertainer. Pacific Rim on Blu-ray has a picture to behold.

Colours sit on the more vivid side of neutral but are never over the top or artificial. Instead they look rich and engaging, while skin tones remain natural.

Edges are crisp and well etched and detail levels are superb, giving depth to landscapes and showing enough talent to pick out finer textures in hair.

Motion is largely well handled too: smooth and stable as aircraft swarm past the camera in the opening scene, while a 3D movie like Gravity sees the Panasonic flex its muscles once more.

The contrast of deepest, darkest space against the vibrant colours of Earth is stunning.

The audio performance of the 460 is what really grabs us: it’s weighty, solid and exciting.

Explosions have impact and depth, and soundtracks are delivered with drama, yet it’s also capable of the subtler things too, getting across the emotion in voices.

3D performance is effective too, offering a sense of depth. Rounded edges, like the front of Sandra Bullock’s spacesuit visor, have a real curve to them, while the perspective feels natural.

Motion, again, is nothing to worry about, although one niggle comes when playing DVDs. Certain movements can see the upscaling struggling to keep up, resulting in some instability.

It is never often or distracting enough to take away from the 460 though – upscaled standard-definition images look crisp, well-judged and they possess very little noise.

Video-on-demand and catch-up services are present and correct in Panasonic’s Internet Apps, while Netflix even has its own short-cut button on the well-designed remote.

You will also see Miracast on the remote, allowing you to transfer content you are watching on a Miracast-compatible smartphone or tablet to your main screen.

The 460 looks smart in its brushed-silver and black finish and features a flip-down cover to hide the disc tray and USB ports to keep things tidy.

The 460 really excels where it matters: it’s equally talented with picture and sound, and has lots of features too.

At this price, the Panasonic is a Blu-ray player to be reckoned with.