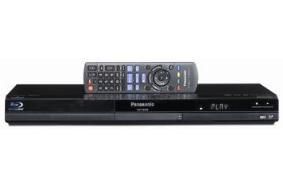 Not everyone who fancies taking the Blu-ray plunge is concerned about wi-fi connectivity, internet widgets or media streaming.

If it's a no-frills Blu-ray player that they're after, Panasonic is only too happy to oblige.

The 'BD45 is the cheapest player in Panasonic's range but from a design and build quality point of view, there's little to distinguish it from the more expensive players in the range.

It's a similar case with the remote control, but this isn't a bad thing: Panasonic's chunky, button arrangement makes for an intuitive wand.

Though it's speedy at boot-up, we think the 'BD45 is sluggish when it comes to loading Blu-ray discs. Saving Private Ryan takes over 40 seconds longer to load than it does on rival, entry-level machines such as the Sony BDP-S370 and Samsung BD-C6500.

Spin the Blu-ray of Terminator 2: Judgement Day and there's a well-defined image.

Blacks are rich and solid – the player does a good job presenting the textures and details on Arnie's bike outfit. Colours are rich and vivid, but lack the level of subtlety shown by the top decks at this money.

Sounds unconvincing
Sonically, there's an even bigger difference between the Panasonic and its key rivals. As the T-1000 and Arnie do battle in the galleria, gunshots sound insubstantial and there's a lack of solidity to the sound.

The 'BD45 may be billed as an uncomplicated entry-level machine, but it isn't much cheaper than class-leaders such as the Sony BDP-S370.

And, given that the Sony machine outperforms the 'BD45, why would you opt for the Panasonic?