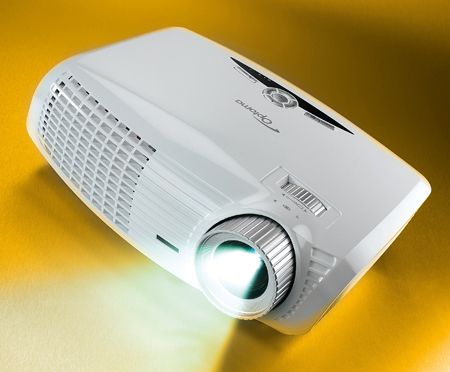 Bound to find favour at this price, but not quite the last word in sub-£1000 performance

There’s nothing in the Optoma HD23’s appearance or specification to suggest it’s comfortably the most affordable projector in its class.

In terms of build quality, maximum image size or socket set it’s giving nothing away, and aside from forgoing the Epson EH-TW5900’s 3D ability (which will cost you extra in terms of glasses, don’t forget) it presents itself as something of a bargain.

Set-up is straightforward, thanks to crisp, logical and friendly on-screen menus and a dazzingly backlit remote.

Given its throw ratio the Optoma is likely to be positioned in front of your seated position (or at least it will unless you’ve a humungous screen to fill), and given the amount of light that leaks from its vents it won’t thank you for putting it on a particularly reflective surface.

You can overcome this trait (and the fact that it generates the most fan noise of any of these three machines) by fixing it to the ceiling, of course.

You can finesse the menus as much as you like, the Optoma’s colour temperature will never dip below ‘slightly warm’, but beyond that it’s a vibrant watch. It doesn’t deliver the strongest contrasts, with black tones lacking outright depth – although they do at least contain plenty of detail.

Whites are bright and clean, though, and they stay that way even if the rest of the screen is in (relative) darkness.

Overall detail levels are high, the HD23 doing particularly good work with skin-textures (even though the overall warmth of images does tend to make everyone look in rude health).

Confident with motion
Movement is handled confidently in most circumstances, although complex patterns in motion can cause a little hesitancy, and it’s a similar story with picture noise: the majority of scenes find the Optoma delivering nice clean images, but when the going gets properly testing some blocking and mosquito noise can intrude.

Most of the time, then, the HD23 is a watchable, quite engrossing projector with a real facility for details and white tones.

Against rivals such as the Epson EH-TW5900 and BenQ W1200, though, its shortcomings (which are far from fatal) are thrown into rather sharp relief. It’s really the strength of the competition, rather than any inherent problems with the Optoma itself, that sees it a star short of top marks.