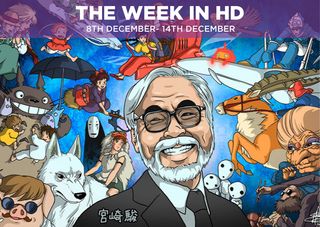 All of Hayao Miyazaki's films for the venerated Japanese animation house Studio Ghibli are now part of this (pricey) volume, beginning with The Castle of Cagliostro (1979) and ending with this year's The Wind Rises.

There are several classics contained within and we doubt there's a film here that you won't be charmed by. Breathtaking visuals, terrific music scores and great stories, this is a collection of one of the great storytellers.

Buy The Hayao Miyazaki Complete Collection on Blu-ray at Amazon

Sylvester Stallone's merry band of mercenaries are back for another (possibly last) outing as the team that is expendable, but has still managed to survive all kinds of scrapes and knocks.

This time they take on a former expendable (and co-founder, no less) - Mel Gibson's Conrad Stonebanks - who's hell bent on taking down Sly's Barney Ross and everyone connected to him. This Blu-ray also comes with a Dolby Atmos soundtrack.

A glorious collection of Vincent Price's starring roles in deliciously dark and macabre films. Adapted from stories by Edgar Allan Poe and H. P. Lovecraft, the films - which include The Fall of the House of Usher, The Haunted Palace, Tales of Terror and The Raven - also feature Gothic icons Peter Lorre and Boris Karloff.

The latest anime from Cowboy Bebop creator Shinchiro Watanabe is a curious one. More fantastical than Watanabe's most popular creation, it's a glossy, glitzy anime that hits the reset button at the end of every episode.

The premise is similar to Bebop - swap bounty hunters for exotic alien hunters - and follows Space Dandy who is, as the name implies, quite concerned about his looks, as he searches for rare alien species so he can earn enough money to party at the space version of Hooters.

He's joined on his adventures by QT (a robot that looks like a vacuum cleaner) and Meow (an incredibly lazy cat), while being pursued by a faction of Gogol Empire for reasons that aren't revealed... yet. In short, Space Dandy is a strange but fun ride.

Harvey Dent. This episode may see the introduction of yet another future Batman supervillain - Harvey Dent and Jim Gordon make an uneasy alliance for the good of Gotham - but the highlight is the blossoming friendship between Bruce and Selina (now safely housed at Wayne Manor).

Oswald continues to be the smartest cookie in the underworld as he tracks down Liza and discovers Fish Mooney's plans of spying on Falcone, but promises to not tell - until the time is right, of course

It's now or never for Liverpool as they could be dumped out of the Champions League at the group stage. Basel have caused other English sides trouble (already beating Liverpool in the group stage), and considering Merseyside's team current form, it's not a formality that they'll come out on top.

Power Outage. The Flash's batteries are running a little low this week after he encounters Blackout, another pesky metahuman with a grudge against Dr. Wells, the man who jump-started these events.

Blackout can harness electricity and gives Allen's Flash quite a shock. Can Flash recharge in time, or will it be lights out for Dr. Wells?

Chelsea lost for the first time this season against Newcastle, which may spell bad news for Sporting as Mourinho won't want a repeat of the ineffective performance over the weekend. Or maybe, just maybe, this is the beginning of a Christmas slump for Mourinho and his team.

The semi-finals continue with two chefs paired up and sent to a prestigious Mayfair restaurant. Hibiscus is a two Michelin-starred fine-dining establishment under chef Claude Bosi, who is renowned for experimenting with the classics.

The two contestants must work a punishing three-hour lunch service under his steady, perfectionist gaze - will they survive the heat of the kitchen, or will they crumble under pressure?

Mama. A series of suicides at the Tarrytown Psychiatric Hospital leads Abbie and Jenny to investigate what's going on there, as it emerges that there may be more than the just the suicides that are drawing the sisters to the facility.

The last two semi-finalists are sent off to Wild Honey in London's Mayfair, where chef patron Anthony Demetre has established an informal approach to fine dining. Our chefs must get used to these new standards while delivering pitch-perfect dishes during a busy lunch service.

Draw Back Your Bow. Arrow meets his number one fan, who also happens to be an Arrow-obsessed serial killer who really, really, really wants his attention. This won't end well.

The noose tightens around Paul Spector as the investigation zeroes in on him. When he tries to make a break for it, he begins to realise that past mistakes are slowly, but eventually, catching up with him.

The penultimate episode of the first series of Babylon sees the internal police investigation involving Robbie come to a head. Elsewhere, the death of Commissioner Miller opens a space at the top of the food chain, and Inglis is odds on to get it. Or will he?

The Things We Bury. As Ward kidnaps his Senator brother to confront the ugly truth about their troubled childhood, S.H.I.E.L.D. and Hydra race to uncover an ancient secret.

We get a glimpse into Whitehall's past as a Hydra-Nazi scientist, another clue to Skye's parentage, and an exciting cameo by one Agent Peggy Carter.

Netflix's new series is their biggest, most ambitious yet - the story of Marco Polo. Set in the 13th century when the famed adventurer arrives in China, there he meets Kublai Khan and becomes involved in plots of politics, intrigue and betrayal. Expect epic battles and, well... Game of Thrones, except in China.

We're hoping against all odds that when Polo introduces himself, he does in so in a James Bond manner; except when it comes to his surname, which he should shout as loud as he possibly can (sorry). Like House of Cards and Orange is the New Black, all episodes will be available from 7pm onwards.

The Day of the Dead. A magical army of the undead! Flesh-eating monsters! An introduction to Medea (a.k.a. future wife of Jason according to the myths)! As Jason gets stuck in the vast necropolis, he finds an unlikely ally in the form of Medea - but can he really trust her?

The Saint of Last Resorts. Anne Marie, an old friend of Constantine's and one of the Newcastle Crew, asks for his help down in Mexico City, bringing him ever closer to understanding the Rising Darkness. Meanwhile, Zed is haunted by her past.

It's the first of a dark two-parter, with more references to and inspirations from the Hellblazer comics - let's hope it's done enough for a second series.

Sports Personality of the Year 2014 BBC One HD, 8pm

The votes will be in on Sunday night and Britain will decide who is the beneficiary of this prestigious yearly award. Will it be F1 Grand Prix winner Lewis Hamilton, footballer Gareth Bale, Jo Pavey from athletics or golfer Rory Mcllroy?

We have a feeling it could be Hamilton.

13 Hours in Islamabad. Series 4 of Homeland nears its conclusion as an attack on a U.S embassy has a number of far-reaching consequences for the American intelligence services.

You may have heard of the HBO TV show Olive Kitteridge that's been heavily hyped in the US (but you probably won't have). It's based on a novel of the same name and stars a plethora of recognisable character actors including Bill Murray, Richard Jenkins and Rosemarie DeWitt.

The mini-series is about Frances McDormand's Olive, following her over a period of 25 years as she experiences problems with depression, bereavement and jealousy in her family. It might not sound like a laugh-a-minute ride, but it's a show to look out after receiving almost unanimous praise during its run in the US.