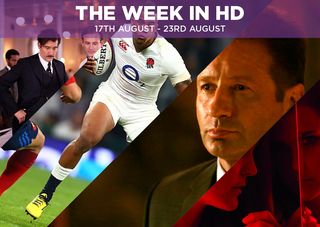 MORE: The Maccabees: Marks To Prove It – CD review

Steven Soderberg ditched film for other pursuits, and one of them bore fruit in this medical drama set in the early 20th century.

Clive Owen plays chief surgeon Dr. John Thackery at the Knickerbocker Hospital in New York, part of a staff that saves patients' lives with innovative approaches to medicine. Slight issue, though: he's a drug addict and regularly uses them at work.

Other stories involve assistant chief surgeon Dr. Algernon Edwards (André Holland), and a black doctor who struggles to fit in due to his race. The Knick is a series made in the HBO mould and worth a look.

Buy The Knick - Series 1 on Blu-ray at Amazon

Popular TV show, The Blacklist, gets a series 1 and 2 boxset.

It follows James Spader's Raymond 'Red' Reddington, a former government agent who became the FBI's most wanted fugitive, who then mysteriously turned himself in on one condition – he'll only speak to FBI profiler Elizabeth Keen to help catch the world's most elusive criminals.

What reason could he have for turning himself in? And does he have an ulterior motive at work?

Buy The Blacklist - Series 1-2 on Blu-ray at Amazon

Barcelona goes into this match a staggering four goals down after a miserable performance at the San Mames Stadium last week.

Athletic won't want to coast to victory and let Barca back in, but Bilbao must surely have one hand on the Spanish Super Copa.

Raisin balls and Wedding bells. Surprisingly, when you're the last man on Earth you're still fallible to making some very bad decisions, as Phil finds out after he decides to wed Carol, only to meet a beautiful survivor called Melissa (January Jones).

The next episode, Sweet Melissa, follows straight after and sees Phil put in place a plan to save humanity.

For the first time in, well, ages, Manchester United has to qualify for the Champions League through the back door, and the team's first match back in Europe is against Club Brugge.

A convincing win with plenty of goals will ease the pressure for the second leg, but if there's one thing Van Gaal's men have found it hard to do early in this season, it's create chances and score goals.

David Duchovny is the detective tracking down Charles Manson and his family in 1967. As he continues to investigate the case of a missing girl, the department puts Officer Chairman undercover into Manson's family.

Bread. It's the much-feared bread week, where the contestants have their patience put to the test. Not for the first challenge, though, as there's no proving time necessary for the signature 'quick' bread. The classic French baguette is the technical challenge this week - which should be an easy one. We all know what shape a baguette should be, right?

And finally, the bakers must create grand, 3D sculptures out of various types and flavours of bread.

...And The Beast From The Sea. It's a full moon, meaning the Tooth Fairy/Red Dragon is set to strike again. Will he stop Dolarhyde from claiming another victim?
Meanwhile, Alana, for some reason, gives Hannibal a chance to redeem himself.

The third series of this excellent Cold War espionage drama premieres tonight. Elizabeth and Philips (both Russian spies undercover as the perfect nuclear American family) clash over how to execute orders from their handlers.

The Hobbit: The Battle of the Five Armies Netflix

Peter Jackson's prequel trilogy ends with its best effort. Though on the whole it may have proved to have a bloated and underwhelming endeavour, Five Armies brings the action to a roaring finale. It also brings those blasted eagles again.

Read the The Hobbit: The Battle of the Five Armies Blu-ray review

Juliette Binoche and Daniel Auteuil play a couple terrorised by a person leaving anonymous surveillance videos on their front door, which get increasingly personal with each package.

It's been a while since we saw Hidden (or Caché in French), but we do remember a lingering sense of menace about the film, along with some shocking scenes of violence. What else would you expect from a film by Michael Haneke?

The sequel to Sinister is out this week, so gear up for next week's Frighfest with this small horror hit.

Sinister features Ethan Hawke play a flailing true-crime writer who, as part of his research into a serial killer from the 1960s, relocates his family to the house where the crimes took place and discovers some snuff film footage featuring the murderer.

Unexplained happenings start to take place as he realises he's out of his depth and his family are in danger. Can he save them, and himself, before it's too late?

A House Divided. Probably one of the more intelligent shows on TV, the penultimate episode of the third season sees the Machine - an AI surveillance that can determine the identities of civillians involved in impending crimes – tampered with, stopping it from seeing the full picture of an impending catastrophe.

Day 2. England won The Ashes in the Fourth Test as the Aussies wilted in the face of the hosts's bowling.

Whatever happens here won't change that result, but a win for the Aussies at the Oval would regain some pride.

And for England? It's a chance to cement their superiority over their rivals.

Manchester United stand joint top of league after two rounds of fixtures. Performance, however, has been under-par as the team struggled to create many chances with Wayne Rooney looking off-key.

Newcastle has endured a disappointing start, drawing with Southampton and losing to Swansea, but a victory here could jump-start Steve McClaren's season.

The Rugby World is mere weeks away so both France and England will be stepping up their preparations. Expect a close match.

Snafu. The penultimate episode of this fantastic series is full of suspense - not only is Peggy captured and interrogated by her own team, but Leviathan is making a lethal move against the SSR and the hapless occupants of a cinema.

Will she confide in Chief Dooley before it's too late? Or will the SSR pay the ultimate price?

N or M? Part Two. Tommy and Tuppence must comb through their fellow occupants of a high society gathering in order to find the nuclear bomb thief - the mysterious N - but can they capture him before time runs out?