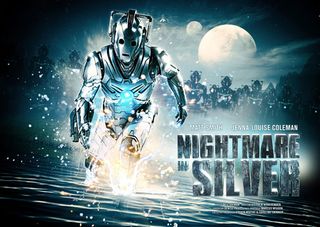 We hope you had a lovely, sunny Bank Holiday weekend, and found time to tear yourself away from the sunshine for some TV-watching. Now that the weather's on the turn, though, you can head back inside and watch the TV Bafta Awards, an FA Cup Final, and a new episode of Doctor Who. Here's what else is on:

A Landmark Story. The first series is nearing its finale story arc, with a series of suspects that had the potential to be the elusive criminal mastermind Moriarty. Holmes might have had a brief telephone conversation with him, but we're no closer to his real identity.

The episode isn't without some zany humour alongside the darker moments, with Acme-style murders and killer bees keeping the Holmes/Watson dynamic full of fun. Vinnie Jones reprises his role as the Arsenal-loving mercenary Sebastian Moran.

Series 9 opens with 16 ambitious contestants vying for a spot as Lord Sugar's business partner with a £250,000 investment in the bag. For the first challenge, they're tasked with selling off as many items as they can from shipping containers. With a restricted timescale of midnight to 4pm, it isn't long until tempers flare and mistakes are made.

Aperitif. Set as a prequel, the TV series about everyone's favourite serial killer pairs up gifted FBI criminal profiler Will Graham to solve disturbing murders, with some sly nods to the good Doctor's as-yet-unreleaved real nature.

Danish actor Mads Mikkelsen (Casino Royale's baddie Le Chiffre) is charming and mesmerising as Dr Lecter, and show's elegant but dark tone draws you in. It's well worth a watch if you can stomach the grisly murder scenes, and for its superb casting of Hugh Dancy, Laurence Fishbourne, Gina Torres and Gillian Anderson.

For Immediate Release. Old clients fired, new clients taken on, a merger on the horizon, an awkward run-in with a father-in-law – it's an eventful episode for the SCDP players. With Peggy and Don potentially working together again, it'll be interesting to see how they clash after a certain press release is published…

The three-part drama comes to a dramatic and scandalous end, with both Aidan and Freya harbouring secrets that threaten both their political and marital lives. Will Aidan be able to plot a successful comeback? Starring David Tennant, Emily Watson and Roger Allam.

The comedy panel show based on truths and lies have a distinguished guest in their company tonight: actor Charles Dance, aka Game of Thrones's Tywin Lannister.

Rachel. Lee finally takes some initiative in making Lucy notice him and his feelings for her – and decides the best course to take is to make her jealous, of course.

Wigan Atheltic make their first ever-appearance in an FA Cup Final, but they're up against the richest club in the game. It's sure to be an interesting match.

Nightmare in Silver. Neil Gaiman is the writer tasked with making the cybermen scary again, and he picks the perfect setting to do so: Hedgewick's World of Wonders, the universe's greatest amusement park.

But the theme park is shut down and abandoned, and the Doctor's old foes the Cybermen have returned, cleverer and more dangerous than before. Check out the trailer above for a sneak peek at Saturday's episode.

With Star Trek into Darkness finally making its way to our giant cinema screens, it's only logical that a documentary exploring the cultural impact of this genre-defining sci-fi series was due shortly. It also chronicles the show's history through several different TV incarnations and films, and features nostaligic contributions from Sir Patrick Stewart (Captain Picard), Leonard Nimoy (Mr Spock), and Nichelle Nichols (Lt Uhura).

The 2013 F1 season heads to Europe, with the Circuit de Catalunya set for more action as Sebastian Vettel aims for another win at the Barcelona race track, while Lewis Hamilton hopes for his first Spanish win with his new team.

The TV Baftas are one of the best awards nights, celebrating some fantastic British comedy, drama and factual TV shows. Graham Norton hosts the glam event from the Royal Festival Hall, London, with the Olympics and Paralympics coverage up for awards.