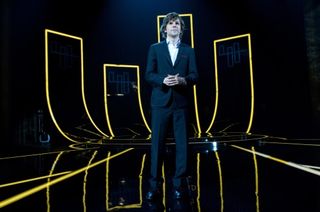 Hello and welcome to The Week in HD! Our guide to all the must-see high-definition TV shows, films, sports and Blu-ray releases to grace your screens over the next seven days. You can also get daily updates on what's on by following our twitter feed @TodayinHD.

Now You See Me Blu-ray

We start the week with summer sleeper hit Now You See Me. A group of magicians called The Four Horseman (although one of them is a lady!), they pull off a heist of a Las Vegas bank during one of their shows. With Interpol and the FBI hot on their heels, can they escape their pursuers?

A collectors' edition of Satoshi Kon's memorable pyschological-thriller anime. The plot (if you can follow it) finds a retired pop singer's sense of reality being altered when an obsessed fan and a ghost from her past enter her life. Said to be one of the inspirations behind Darren Aronofsky's Black Swan, this film is something of a mind-bender.

A return to form for Sofia Coppola? We quite enjoyed her last effort, Somewhere, but it didn't take off. The Bling Ring is a return to the feel of her earlier films, depicting a group of fame-obsessed teenagers as they go around Los Angeles and rob celebrities' homes. Surprisingly, it's a true story.

Election Night: Part II. The finale of the second season of Aaron Sorkin's tales of a major American broadcaster. Everything comes to a head as the team get ready to report the results of U.S. election with future of the newsteam still in doubt after the Genoa scandal.

F*** The Pain Away. Ahem. Excuse the language. We're almost half way through the sixth season of the much improved True Blood. This episode sees Sookie enlisting Lafayette's help to summon her dead parents. Stranger things have happened on this show.

At the moment, Arsenal and Chelsea are at the top of the Barclays Premier League. This tie marks the first match-up between the two. Will old adversaries Wenger and Mourinho play second-string sides? Or will they be looking to gain the edge over the other as the English football season marches on?

Masterclass. Presenters Paul Hollywood and Mary Berry give a demonstration of how the Bake Off challenges should be done, making some delicious looking muffins, desserts and pies. Mmmmm.

Manchester City handed Newcastle a 5-0 smack-down in the first match of the season. With City's away form handing fellow title challengers the iniative, can Newcastle bounce back from the derby-day defeat and win against the odds in the Cup? Probably not.

Hiddlestoners rejoice! A chance to see Tom Hiddlestone in a film that doesn't have him dress up in a costume with horns. Archipelago sees a family's internal problems rise to the surface during a holiday in the Scilly Isles.

Episode 3 of 3. The kind of TV show that should allay people's health fears (or cause new ones). This final episode follows Michael Mosley and the team of doctors in Lancaster to see if trees could be the answer to air pollution. The team also find the answers to many other questions including whether there's a cure for hay fever. Also available on BBC iPlayer.

The Courier. We're still unsure about this latest export from America. Still, if you're looking for a show to fill in the gaps until the return of the big guns next year, you could do worse. This week sees Robert Knepper (T-Bag from Prison Break) star as a mysterious middleman that no-one, not even James Spader's Red, has seen in the flesh. Good thing we know what he looks like then.

Hostages. US comedy from Armando Inanucci (The Thick Of It, In The Loop). If the first season saw the Julia Louis-Dreyfus starring comedy finding its feet, season two has gone from strength to strength. Hostage sees a crisis heating up in Uzbekistan, with another conflict striking closer to home for Dreyfus' Selina.

New York Sour. The first epsiode of the fourth season of the acclaimed period drama. It's now 1924 and there's a new prohibition agent in Atlantic City.

After facing Chelsea midweek, Arsenal's trophy campaign sees them up against Liverpool, who are riding high with Suarez and Sturridge in tandem up front. Could they throw a spanner in the works?

England lock horns with Ireland in the second Group A match. Expect grunting and potential confusion until you realise it's rugby league, not rugby union.

With director David O. Russell's American Hustle out in cinemas in December, now might be a good time to check out his previous work, starting with his Oscar-winning Silver Linings Playbook. Jennifer Lawrence and Bradley Cooper star in the film that gave the former a Best Actress Oscar. The ending is a bit syrupy but this is still a film worth watching. Even Bobby De Niro turns in a good performance.

Instead of another footbal match, we're continuing our NFL theme with a look at American Football. We're still not sure what's going on or what it means but we do like the dances by players whenever they score a touchdown.