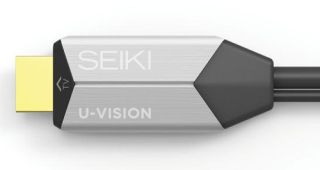 This external upscaling HDMI cable claims to rectify this, delivering better results from non-4K sources and going some small way to dealing with the lack of 4K content. At least that's their theory.

An up-conversion adapter that will up-convert 1080p to 4K and 720p to 1080p will follow in Q2. Seiki also claims "real-time detail enhancement, edge restoration and noise reduction" for the cable.

Frank Kendzora, executive vice president at Seiki, said: "Seiki aims to speed up the adoption of the new Ultra HD TV standard with more 4K content enabled by one of the best up-conversion technologies available today."

We're expecting to see a whole host of new 4K TVs on display at CES 2014, though the amount of 4K Ultra HD content available will no doubt once again be the elephant in the room.