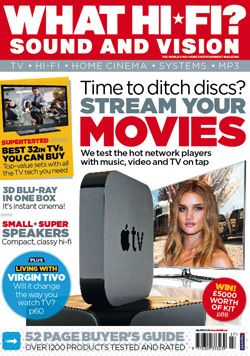 That's the question we ask in this month's issue of What Hi-Fi? Sound and Vision, on sale today. Our cover test features eight of the latest network players with music, video and TV on tap.

For those with bigger budgets, Naim's new NDX media player gets a thorough examination in our Temptations section.

In a similar vein, we take a look in First Tests at Echostar's HDS-600RS Freesat HD PVR with Slingbox streaming technology, which allows you to watch your TV content anywhere in the world.

While our Insider section ponders the position of Apple iTunes, and whether its dominance as the big movie and music provider is under threat from new streaming rivals from Spotify, Google, Amazon and YouTube.

And in The Big Question three readers decide which is the best way to connect your music streaming system: wireless, wired or powerline?

If you want an instant home cinema solution, check out our four-way Blu-ray in a box Group Test, with models around the £400 mark from LG, Panasonic, Samsung and Sony.

And for those who don't have space for a giant TV, our TV Supertest pits seven 32in sets from LG, Panasonic, Samsung, Sony and Toshiba against each other.

Meanwhile hi-fi enthusiasts can drool over six pairs of gorgeous compact stereo speakers from £600-£1250, guaranted to deliver superior sound from your system.

Oh, and don't forget you could win £5000 of fabulous high-tech kit from QVC in this month's competition. Head on over to whathifi.com/win to enter.

The July 2011 issue of What Hi-Fi? Sound and Vision is in the shops now, or you can download the digital edition to your Mac, PC, iPhone or Android device for just £2.99 + VAT.