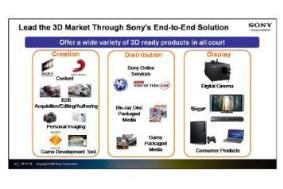 Central to that plan is the need to establish itself as a major player in 3D TV technology, the company planning to use its various businesses to offer an 'end-to-end' solution. It says it will be focusing its energy on developing both hardware and software for 3D at home, and targeting a launch of products from next year.

It says it expects 3D hardware sales of Y1tn, or almost £7bn, in the 2012-13 financial year. That will cover new displays and Blu-ray players, though the company also has plans to make 3D content available online, and also offer a firmware upgrade for the PS3 to allow 3D gaming.

20% of the LCD TV market
In more traditional areas, Sony's aiming to turn around its LCD TV business, currently making a loss, and restore it to profitability during the 2010-2011 financial year. It also has an ambitious target of taking a 20% share of the worldwide LCD TV market by 2012-2013; currently its market share is around 13.7%.

To do this it will develop new displays using proprietary technologies, and introduce what it calls 'Evolving' TVs, able to be updated with new applications over a network.

It's also aiming to return its gaming division to profitablity over the next 18 months, both by the simple method of increasing hardware and software sales, and also by reducing costs and enhancing PlayStation Network services.

350m network devices by 2013
PlayStation Network, which has over 33m account users, is also at the heart of plans to expand the company's range of network-connected products and services. To this end it will be strengthening collaborations with Sony Ericsson and accelerating the roll-out of its e-book readers, targeting an installed base of 350m network-connected Sony devices by 2013.

Other plans include growing its lithium-ion battery business, potentially by moving into the automotive sector, continued investment in emerging markets to recruit new customers, and a 30% reduction in power consumption of all products by 2016, when compared to current levels.

The company recorded a loss of Y98.9bn (£669m) in the last financial year, and expects to again make a loss, currently estimated at Y95bn (or £642m), in the current period. That's despite already achieving 80% of the Y330bn (£2.3bn) cost savings it has planned for the period to March next year.

Those cost savings have seen a reduction of almost 20,000 jobs, or about 12% of its global workforce, and plans to close 10 factories worldwide by May next year.

Sony boss Sir Howard Stringer told a press conference today that "We are driving costs out of the company to right-size it for the businesses we compete in."