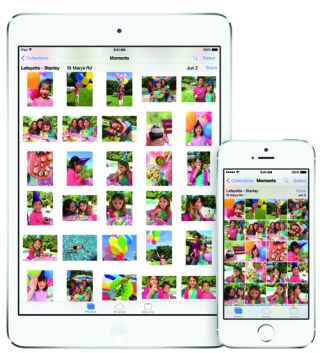 The latest iteration of Apple's iOS mobile operating system, iOS 8, was officially unveiled at the World Wide Developers Conference in San Francisco, and is set to be available for free download from around 6pm UK time tonight, Wednesday September 17th.

Apple has included a range of new features but keep the same minimalist, flat design found in iOS 7.

Apple announced iOS 8 along with OS X Yosemite, the latest version of the Mac operating system, and several features that would tie the two platforms further together, an over-arching feature which Apple is referring to as 'Continuity'. More on that later.

Apple has confirmed that iOS 8 will be available to download from September 17th, probably from around 6pm UK time.

Apple wants to make the software available to as many iOS customers as possible. which means iOS 8 will be supported by iPhone 4S, iPhone 5 and iPhone 5S, the iPad 2 and above, iPad Mini and iPad Mini with Retina Display and the iPod Touch 5th gen. It will of course come pre-loaded on the new iPhone 6 handsets.

If you want iOS 8 now but you're not an Apple developer, YouTube channel iCrackUriDevice has posted a 15-minute video detailing steps of how to install the iOS 8 beta on to iPhones without being linked to a developer account.

However, it does stress (and we would stress this is further) that it isn't recommended, will void your warranty and could cause problems with your device. What's more, beta releases are beta for a reason, so it's probably best to wait for the finished article.

The messages app has received a complete overhaul: with many new features having a striking resemblance to those of popular messaging app WhatsApp, which was recently purchased by Facebook for $19billion (£11.4bn).

Users who are involved in group conversations now have the ability to leave the group, add new contacts to the group and can turn the Do Not Disturb feature on to silence notifications if need be.

You can also share your location within a group conversation and a thumbnail of the contact's head will appear on a map. Media content shared within a group thread is grouped together to save users scrolling through entire conversations to find a picture or video.

Users can also now send voice clips by holding down the mic button and swiping up to finish the clip and send it. The same process applies to video clips too. In Snapchat fashion, these messages can be programmed to "self-destruct" after a pre-determined amount of time.

The messages app can still be synced with other iOS devices and Macs, but now SMS messages can be synced too. Users will also have the ability to send SMS messages – as well as iMessages – to contacts from a Mac or iPad, and even make calls from one device using another. Continuity.

Apple has made several improvements to the Spotlight search feature within iOS 8. Not only will it search for related content on your device, but it will search the internet and third party apps for relevant results.

For example, if you were to search for a landmark, Spotlight will return a Wikipedia article on that place, as well as Map directions if it recognises it's in the same country.

If you were to search for a restaurant that a contact recommended in a message or email, Spotlight will return contact information and opening hours as well as the message your contact mentioned it in. Universal search, then, coupled with a dash of Google Now-esque information delivery.

A big, new feature within iOS 8 is HomeKit, which allows users to control their home automated devices from just one app. Anything from lights and doors to thermostats and webcams from various manufacturers will be able to be controlled from your iPhone.

And with Siri onboard to assist with things too, you will be able to programme it to recognise certain commands. For example, saying "Siri, time for bed", can dim the lights, lock the doors and turn the heating off. That's the theory, at least.

The rumours regarding the Apple Smart Home were true, then, and it will be interesting to see how far Apple, and app developers, can take this potentially game-changing platform.

The Touch ID feature currently available on the iPhone 5S and iPad Air is limited. Users are only able to unlock their phone and make purchases on the iTunes Store.

Apple has now opened up the technology to third party apps, so all sorts of potential suddenly become available, from financial services, to health, to gaming. To ensure complete privacy for individual users, app developers won't be able to gain access to fingerprint or password data even if their apps make use of the tech.

Apple is unsurprisingly keen to jump on the health apps action. It already has several third-party apps in the App Store, but with iOS it wants to take things further with the introduction of HealthKit.

Users of the various health-related products will know that the data is stored within individual silos. HealthKit will now draw together all health-related data under one roof, with Apple's own Health app providing a summary of your current fitness.

Apple highlight the potential of the Health app, such as sending data to your doctor ahead of an appointment (in the keynote speech, The Mayo Clinic was used as an example, it's unclear whether this feature will be available in the UK on release).

With rumours of an Apple iWatch, complete with plenty of health and fitness features, we'd expect to hear more about the HealthKit in the autumn.

Apple has introduced actionable notifications within iOS 8. When a message is received, users are able to reply straight from the drop down notification. The same applies to responding to Facebook notifications, emails and calls.

If, for example, the iPhone is locked and you receive a Facebook invite, you will be able to swipe the notification on the lock screen and accept or decline from there, without having to go into the Facebook app.

This features uses iOS 8 and the new OS X Yosemite software to better sync your Apple devices and allow you to multi-task seamlessly across all your iOS devices.

Also new is the iOS 8 easily creating a wireless hotspot on your Mac, prompting you on your computer to connect to your phone's network connection whenever you are without wi-fi.

The reception for iOS 8 at WWDC was overwhelmingly positive, as you'd expect from a room full of Apple developers, but in a typically bullish presentation led by CEO Tim Cook, there were a huge number of interesting new features to look forward to.

As ever, many features appeared to be 'borrowed' from Android and Windows, while apps such as Dropbox, Google Chrome and WhatsApp, to name a few, will be calling foul on the similarity of some new features. Here is the CEO of Whatsapp, for example.

But, Apple is also set to open-up a world of new possibility for developers and in turn users, with health and the smart home two new key areas ripe for Apple-supported development.

With Android smartphones such as the HTC One M8, Sony Xperia Z2 and soon-to-be-released LG G3 queuing up to take on Apple and the iPhone, iOS 8 certainly looks like a big step in fending off all-comers, and keeping the iOS in pole position when it comes to smartphone software superiority.