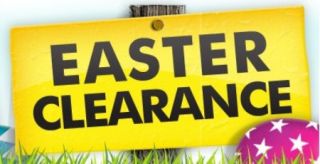 UPDATE: Audio T has joined in the fun, offering a discount voucher to customers purchasing items online or in store over the next 9 days.

The offer runs until Saturday 30th April and vouchers are valid for six months.

Purchases made on the Audio T website or in store - Brighton, Bristol, Cheltenham, Epsom, Oxford, Reading, Southampton, Tunbridge Wells - are valid for the voucher offer.

Best Buy
As well as offering '2 for £22' and '4 for £40' deals in store for Blu-rays (thanks to Forum member GetCarter for the spot), Best Buy has plenty of deals on TVs and more.

Retailers like nothing better than a 'while stocks last' sale over a Bank Holiday weekend, and this Easter is no different.

Allow us to round-up the best deals around online and in-store. We'll be updating this story all weekend, so keep checking back for new deals.

The likes of Amazon, Play, Sevenoaks and even Sky are offering you the chance to save some cash this weekend, so let's dive in to some of the best deals around...

Amazon offers
Planning a party? Then Amazon can help with the Gear4 HouseParty 4 iPod dock, now half-price at £40.

If it all gets too much then you can retreat in to your shell thanks to decent discounts on Creative's Zen X-Fi range of MP3 players, such as the X-Fi2 16GB touchscreen player.

When it comes to content, Amazon has a 2-for-£15 Blu-ray deal, featuring King Kong, Lock Stock and Two Smoking Barrels, Shakespeare in Love and many more.

The long Bank Holiday weekend will give you the chance to work your way through a box-set such as season one of The Killing, yours on DVD for a knockdown £39.

Play.com deals
There are plenty of savings to be made over at Play, too.

There are some good savings on headphones, too, with deals on Sennheiser cans such as the CX 6 travel earphones now half-price at £50, while the Sony MDV-V300 headphones have 55% off, yours for £18.

As always there are also bargains in the software department.

And for under £3 (!) you can have your choice of The Big Lebowski: Special Edition, Dead Snow or Shaun of the Dead, amongst others.

Sevenoaks sale
High-street stores are also getting in involved. Sevenoaks has some great deals including the Onkyo TX-SR608 available at £299.

Head over to our dedicated news story to see all the offers at Sevenoaks Sound & Vision over the coming holiday.

Home Cinema Store, an Essex company with stores in Basildon and Romford, has some striking savings on offer, too.

If you're in the market for the new KEF T Series, they Home Cinema Store will give you 10% off any AV amplifier bought at the same time.

As well as deals on the newest, top-spec TVs, they will also be offering trade-in deals for all customers who recycle their old TV as they buy.

The Sony BDP-S470 3D Blu-ray player is down to £120 and there are plenty more savings to be had on hi-fi, home cinema and MP3 kit.

Sky is also getting in on the act, offering existing customers the chance to upgrade to HD this weekend and get a free Sky+HD box, free standard set-up and £100 M&S vouchers.

Head over to the Sky website for more details on this Bank Holiday weekend deal.

And Russ Andrews has just contacted us to say that it will be offering savings of up to 25% on a wide range of Kimber cables over the Easter weekend.

We'll be updating this story as and when we see any spectacular steals. Happy shopping!