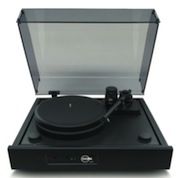 New from Slovenian turntable specialist Kuzma is the Stabi M, launched at CES 2013 and described as 'a modern turntable, designed in a classic style with the emphasis on providing the best possible record playback'.

Selling for £12,495 without arm through UK distributor Audiofreaks, the new model is assembled from solid pieces of aluminium for rigidity and vibration-damping. The outer sides of the main structure are aluminium plates to add mass, with the top-plate also made from aluminium, and suspended on elastic dampers allowing for levelling of the platter and tonearm.

Similarly the 12kg platter is made from two 4cm thick pieces of the metal, sandwiching an acrylic damping plate, and the armboard is also heavyweight aluminium, with it and the main bearing bolted together with more aluminium blocks.

The bearing uses an inverted shaft with a ruby ball, and the motor is mounted in a brass and aluminium enclosure, itself housed in a second brass outer housing to further isolate the main frame from any motor vibrations while maintaining rigidity.

An external power supply feeds the three-phase DC motor, and allows precise speed adjustments, while the main controls on the turntable allow start/stop and speed change.

Full operating speed is reached in just over three seconds from stopped, thanks to the use of a special stiff plastic belt, the whole drive system being said to give 'high torque… with the positive properties of belt and idler drives, while minimising the negatives'. Speeds of 33.3, 45 and 78rpm can be set.

The turntable comes complete with a hefty vibration-proofing acrylic cover, mat, clamp, tools and oil, and can accept tonearms up to 12in designs such as Kuzma's own Stogi S12 VTA.