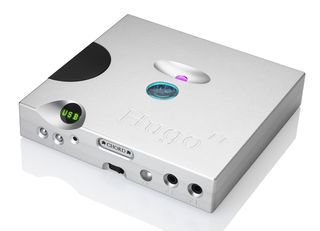 Additional features over the original Hugo (£1400) include two XLR outputs, two 1/4in headphone outputs (in addition to a 3.5mm headphone jack), upgraded coaxial and optical digital inputs, a new larger chassis and supercapacitors.

For those who want to stream music wirelessly through the device, there's A2DP aptX Bluetooth capability provided by a custom-made module.

Although it's designed to run continuously from the supplied charger, Chord's engineers have also improved the device's battery and added Supercap energy storage, a technology seen in F1 cars where supercapacitors back up the car's batteries by sharing the load and charge demands, thus protecting them.

According to Chord they serve a similar purpose in the Hugo TT, extending the battery life as well as improving dynamics and demanding transients in recorded music.

Chord Electronics' founder John Franks says: "The original Hugo was not optimised for home use: a minority of audiophile cables with the largest RCA and USB terminations sometimes proved difficult to accommodate, and the shorter range of the Bluetooth pairing distance could sometimes cause problems in larger homes.

"The upgrades we've made would not have been possible within the existing Hugo's smaller dimensions, but fit comfortably within the larger Hugo TT."

MORE: Read all our Chord Electronics reviews and news

Chord describes it as "essentially a Hugo in a Chordette chassis", bringing the latest FPGA DAC technology into a more affordable home unit.