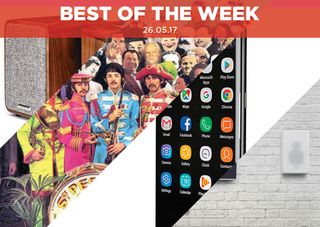 This week Dali made moves to develop a new multi-room system, Bang & Olufsen branched out into beer-making and ATC revealed a new range of vertical/horizontal wall-mounting speakers.

After making a splash with its Katch and Kubik Free wireless speakers, Dali is moving into the multi-room market.

There are few details, however the Danish company confirmed it is working on a new wireless speaker solution that will use Lenbrook International's BluOS, a hi-res multi-room platform.

BluOS is brand-agnostic, so any BluOS compatible device can connect to the same wi-fi network. It also forms the core of Bluesound's Award-winning multi-room speakers.

Bang & Olufsen uses wireless speaker to create its own… beer

In a curious use of resources, Bang & Olufsen has branched out into brewing its own brand of beer, called Beobrew.

And how does it do this? Well, in true hi-fi tradition, it takes a BeoPlay A1 speaker, drops it into a fermenting tank and plays music throughout the two-week conditioning process.

If you're in the UK and tempted by the sound of Beobrew, you can have some delivered to your home via B&O's website.

ATC to launch wall-mounted versions of its classic floorstanders

ATC has remodelled its SCM7, SCM40 and SCM11 speakers and turned them into wall-hung units.

They make up the first of ATC's range of high-performance on-wall speakers for the custom residential market.

BBC Store to close in November

Loewe adds 77in model to its Bild 7 OLED TV range

Coming soon: the ‘gramophone’ Bluetooth speaker that’s made of vinyl

10 of the best Sgt. Pepper cover versions to test your system

Devialet and the art of impermanence

Are these the Star Wars gifts you're looking for?

How to watch the Champions League final for free: in 4K, online, on mobile

After the widely-reported debacle of its Note 7, Samsung needed a win - and it has delivered one in the S8.

Stunning build and design mark this out as a beautiful phone, but it has smarts too. Performance is snappy, the camera is excellent and the sound is decent, though it could be improved.

However there are a few niggles. The Bixby voice assistant isn't yet ready and the fingerprint scanner is poorly positioned, causing a number of accidental swipes.

Nonetheless this is Samsung back on top form, with a phone that demands attention.

Ruark's MR1 were cracking desktop speakers in 2013, but they have since been surpassed. Can the Mk2s return to the top?

The Mk2s continue the good work of the MR1s, offering a step up in performance with a stunningly musical sound.

There's no support for hi-res or inclusion of a USB port. Still, these are superb speakers and a new favourite of ours.

An in-ear that also does noise-cancelling?

Bose's QuietControl 30 sport an odd design, the headphones are attached to a plastic collar that hangs around the neck. It's durable enough, but not the most comfortable of fits.

Nevertheless, it's the sound we're interested in - and it's impressively spacious. Insightful, but also capable of delivering some punchy bass. The noise-cancelling works to a tee, eliminating noises in an effective manner.

The design may grate, but we have no quibbles with the performance. Another five stars for Bose.