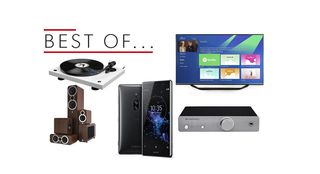 This week, Q Acoustics revealed the successor to its Q3000 speaker package in the Q3000i, Sony unveiled another new flagship phone in the 4K-sporting XZ2 smartphone and Sky narrowed down a date for the launch of Spotify on its Q TV service.

With it having been Record Store Day all week, there's a vinyl flavour to this week's reviews. We have critical takes on Pro-Ject's Debut III S Audiophile turntable, Goldring's E3 cartridge and Cambridge Audio's Duo MC/MM phono stage.

The range will be available in the last week of April.

Less than 50 days after the launch of the XZ2 and XZ2 Compact, Sony has released another flagship phone in the XZ2 Premium.

It has a 5.8in 4K HDR screen (30% brighter than Sony's previous best), a USB-C connection and the ability to record content in 4K HDR.

It'll be available in the summer in either chrome black or chrome silver.

Spotify to launch on Sky Q next week

Sky Q's Spotify integration is set to go ahead on the week beginning April 23rd.

It was back in February when Sky announced the Spotify link-up, in conjunction with bringing HDR to the service as well as more 4K video content.

As yet there hasn't been a further update with regards to when HDR is coming or how many titles will be added to the service's 4K library.

Sonos One will be available in more colours

How to set up a turntable

Behind the scenes at Pro-Ject

15 of the best gift ideas for vinyl lovers

Being Hurd - inside a vinyl subscription service

25 record stores to visit before you die​

A new record: What Hi-Fi? remembers its first time​

9 affordable ways to upgrade your turntable​

Pro-Ject's S Audiophile follows in the proud tradition of the company's Debut series - it's another excellent effort.

It's a deck that's good with detail and dynamics, assisted by clear and natural treble performance.

With a solid and smart design, there's little here we can find fault with.

If you have a good, mid-range deck that requires a cartridge upgrade, we can't see past Goldring's E3 for a better pick.

It's a balanced and detailed performer that offers refinement, clarity and expressive dynamics.

Throw its ease of fitting into the bargain and you have a superbly realised cartridge.

Cambridge's Duo MC/MM phono stage is a brilliant performer that comes with the added bonus of a headphone amp.

It boasts a full-bodied and warm presentation - it's a phono stage that's good with dynamics as well as timing. Factor in its lovely looks and ease of use, and it's hard to find fault.

If anything we'd suggest that Rega's recent Fono MM Mk3 offers a bit more punch. But be that as it may, it doesn't take anything away from what is a fantastic phono stage.