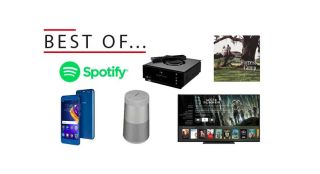 This week there was speculation Apple could be preparing 4K films for iTunes, Spotify is getting ready to take on Apple in the podcast space and Forrest Gump is getting a chocolate-coloured vinyl release.

Elsewhere we have an exclusive review of Naim's Uniti Atom amp/music streamer, plus reviews of Bose's SoundLink Revolve wireless speaker and Honor's 9 smartphone.

This week marks the release of the September edition of What Hi-Fi?. In it you'll find group test on hi-fi speakers around £300, Dolby Atmos soundbars, 4K Blu-ray players and your usual bevy of hi-fi and home cinema news.

MORE: Save over 50% on What Hi-Fi? plus a free five-star wireless speaker!

It looks like we could be getting 4K HDR films through iTunes.

While Apple hasn't confirmed anything, users have spotted some films being registered as 4K HDR, although the film can only be downloaded in HD.

It certainly syncs with other rumours that speculate that Apple is prepping a 4K Apple TV box.

Spotify is looking to challenge Apple's grip on the world of podcasts.

A number of podcast hosts are ready to plug Spotify during their shows, with Spotify looking to fund a new batch of original podcasts in the near future as it looks to take Apple on its own turf.

More twenty years after it came out, Alan Silvestri's Forrest Gump is getting a vinyl release.

But this release is not like any other. This vinyl will be chocolate-coloured, echoing the film's famous phrase that "life is like a box of chocolates".

There's only 1500 copies being pressed in the chocolate colour and it'll be out this September.

Creative Halo is a Bluetooth speaker with integrated light-show

Motorola's G5S and G5S Plus smartphones due this month

How to watch Premier League football on TV, online, mobile

If you fail to be excited by Naim's Uniti Atom then there's little hope for you.

It's rare you get a product that looks and sounds as good as the Atom. With class-leading clarity, precise timing and impressive dynamic range, it's an upgrade on the UnitiQute 2.

We can't find anything of note to moan about. This streamer has plenty of substance to go with the style.

Bose's Revolve is a small speaker but it delivers a huge performance.

It produces a big, solid, punchy sound, so you'll hear it no matter what. However that comes at the expense of detail and articulation.

If you don't mind that, or the £200 price, then the Revolve is a steady option.

Performance is responsive, the design pleasing and the feature set is excellent. It has its share of problems with an average battery and Android customisations that are fiddly to use at the top of the list.

It's a good phone rather than a great one, fine for those on a budget.