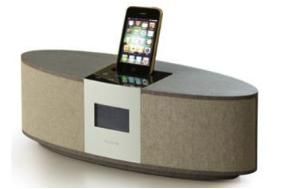 The selling arrangements for the new Auluxe systems are a little complicated and it turns out we were misinformed yesterday, so by way of clarification:

The Auluxe Dew will only be available via Amazon.

The Reverie Casa is the only dock that Selfridges will be taking, but it will also be in Harrods and other selected retailers. Harrods will also be taking the Reverie dock.

The Auluxe Reverie, Auluxe Reverie Casa (pictured) and Auluxe Dew are the systems in question, offering a range of functionality, including iPod docks, and retailing at £180, £299 and £200 respectively.

Established in July 2007, Auluxe is looking to make a splash with a series of audio products that offer 'distinguished handcraftmanship' alongside top-notch audio performance.

The Reverie offers a universal iPod dock, with iPhone support, plus an FM radio and alarm clock. Available in a glossy white or wooden finish, there's also a remote control.

The bigger brother, Reverie Casa, has a similar specification – on the information we have, at least – but is an exclusive to Harrods.

Lastly, the Auluxe Dew meanwhile takes the shape of a 2.1 hifi system, with a cube subwoofer and two small satellites. It's available in maple, cherry chrome, gloss white and gloss black finishes.