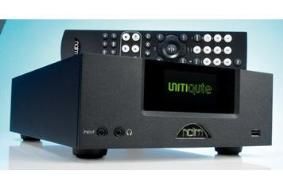 Systems Product of the Year, Awards 2010. The UnitiQute has been a while coming, but its performance and facilities were worth the wait. Simply superb

Systems Product of the Year 2010

Reviews of recent Naim kit have tended to start with ‘at last' or include the term ‘long-awaited' in their opening remarks. The company's enthusiasm tends to lead to announcements being followed by a lengthy wait.

So here – at last – we have the long-awaited UnitiQute: for £995 you get almost all the functionality of the original NaimUniti, apart from the CD player and some inputs, in a unit half the width.

The slim box delivers FM, DAB and internet radio, network streaming of music from computers or storage devices, and playback of USB devices or iPods/iPhones.

Built-in amplification
Also aboard is a 30W per channel amplifier: as in the NaimUniti, it's derived from the company's Nait 5i integrated amp, and as is usual with Naim amps, it sounds considerably heftier than its specification suggests.

Add a range of digital inputs, one analogue in (with optional unity-gain home cinema bypass for use with an AV receiver), plus outputs at preamp level to feed an external amp, and you just about have the UnitiQute covered.

Oh, apart from the fact that there's a bass contour function for low-level listening, and that in the iPod department it goes further than the original NaimUniti.

Naim's n-Stream app
Rather than requiring a dedicated cable to connect the portable players, and then only in the analogue domain, the 'Qute can accommodate Apple's conventional USB cable in a front-panel socket, and connects digitally.

Current production versions of the original NaimUniti do the same. New, too, is Naim's n-Stream app, available from iTunes: this and a wireless network not only give complete control, but also ‘live' feedback of what's playing.

Choosing a track or an album in streaming mode is a matter of swipe and tap, and the same applies to picking radio stations, storing presets and so on. Tap at the top of the screen and you get a readout of the bitrate and sampling frequency.

Sources, speakers and formats
We used the 'Qute with a variety of sources and speakers: wired and wireless networks, USB sticks and iPods, computers and NAS drives (and a pre-production UnitiServe), and the likes of Neat's Petite SX speakers and PMC DB1is.

And the 'Qute gives away a little (but only very little) to the NaimUniti. We've been trying everything from hi-res FLAC and WAV downloads – up to 96kHz/24-bit – right down to some pretty rough low-bitrate MP3s.

Plus we've sampled radio stations from ultra-tinny 32kbps MP3 right up to Radio Paradise's AAC stream and the Dutch AVRO Klassiek channels, some of which run at 320kbps.

What have we discovered? Well, the UnitiQute can sound amazing with 320kbps MP3, even better with FLAC or WAV rips from CD, and just breathtaking with well-recorded hi-res music.

As mentioned above, it's just a shade more restrained than the NaimUniti, and lacks some of the Award-winner's punch and drive, but the sound is open, fast and superbly weighted, thundering out bass lines with the same conviction as it brings to the finer details of a complex recording.

A wired connection is best
It's also worth considering a wired network connection if you're going to play a lot of hi-res music – like other such devices, the UnitiQute can fall prey to heavy traffic elsewhere on the network when shifting high-bitrate data wirelessly.

And it takes no prisoners with tracks submitted to brutal data-reduction (so avoid those 64kbps MP3 rips), and in common with the NaimUniti it can't stream Apple Lossless files directly – if you're running a Mac, Elgato EyeConnect will transcode on the fly, while software such as Asset UPnP will do the job on the PC platform.

The UnitiQute is capable of delivering a big sound, and has amazing flexibility. Naim had better crank up production: this little system is going to be big.

Watch our Awards video of the Naim UnitiQute