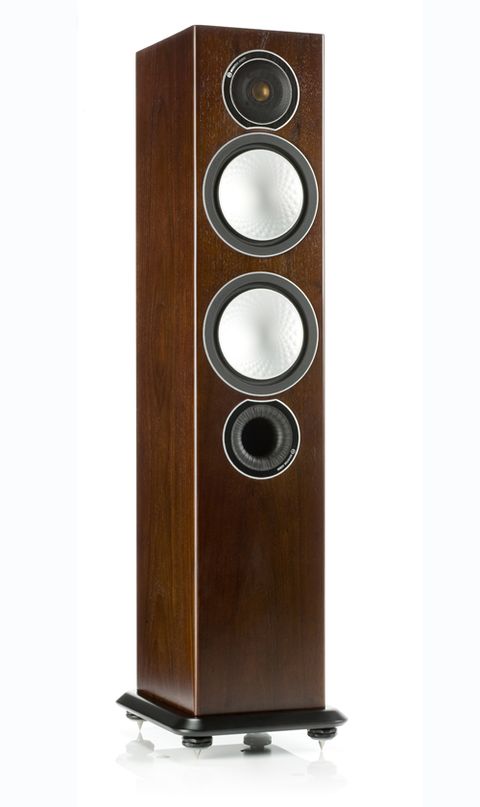 A Curate’s egg and no mistake, but the good bits are really very good indeed

It’s been well over four years since Monitor Audio’s well-regarded Silver RX series appeared in showrooms – more than enough time for rivals to progress and for the Monitor Audio engineers to get excited about how they might improve on an already-lauded range.

These slender, elegant Silver 6 floorstanders are the first fruit of that long, hard think to make it into our listening rooms.

The finishes available are black oak, natural oak, walnut and the rosenut of our review sample. You can also have your Silver 6s in shiny black or white for an extra £100.

As you’d expect from a company with Monitor Audio’s track record, the new Silver range is a thorough reworking of the series it replaces.

The new bass and mid/bass drivers, for instance, are a refinement of the innovative C-CAM technology that aims to deliver both rigidity and good internal damping from those dimpled cones.

The new tweeter design produces much lower resonance than before thanks to revised management of air-compression and venting, and improved response at lower frequencies indicates a smoother handover to the mid/bass driver.

At 20mm, the MDF cabinet walls are thicker than before, and more cabinet rigidity is provided by the bolt-through fixings used to simultaneously secure the drivers and act as a brace.

The single-bolt-per-driver arrangement allows a very clean appearance too, to which magnetic grille fixings also contribute.

What with one thing and another then, the Silver range is less an update of the Silver RX series and more of a re-imagining. All the new models offer higher impedance, higher sensitivity and reduced distortion over the speakers they replace.

Hoisted from their packaging, the Silver 6s immediately impress as compact, handsome and sturdy speakers.

The white drivers might look a little glaring in a dark-wood veneer such as ours, but there’s no arguing with the luxuriousness of these speakers’ build – where perceived value is concerned the Silver 6s set new standards at the £1k floorstander mark.

The plinths are a little more prosaic, but they’re not too intrusive and allow the spikes to be sited outside the footprint of the speaker.

Fiddle with the positioning of the Silver 6s as much as you like (closer to a wall/away from a corner/toed in towards the listener/toed in a bit more), you won’t get a representative sound until the Monitor Audios have had a good 72 hours of use under their belts.

We preferred them out in the room, just slightly angled towards the listener. Once that ritual is observed, though, the Silver 6s reveal themselves to be a vigorous, up-and-at-‘em listen with a level of enthusiasm and attack that borders on the relentless.

No matter the type or quality of the recording offered, nor the source from which it’s derived, the Monitor Audios sink their teeth in and give it a good shaking.

From Nick Cave & The Bad Seeds’ Higgs Bosun Blues to Martin Carthy’s The Wind That Shakes The Barley via Drake’s Take Care and Samuel Barber’s Adagio For Strings, the Silver 6s exhibit the same fanaticism where the leading edge of notes is concerned and the same unwillingness to let the minutiae of a recording properly reveal themselves.

There’s a lot to be said for the Monitor Audios’ rather caffeinated approach. Certainly where the entry into individual notes and sound is concerned there’s nothing to touch them – this sort of unarguable, straight-edged accuracy is rare at any price.

And it makes for a very well defined presentation, with music kept firmly on the front foot and a tangible sense of momentum to even the most pedestrian recordings.

The metal driver array (or, more correctly, ceramic-coated metal) brings a crisp, occasionally rather chilly signature to the Silver 6s’ sound – certainly a song as warmly recorded as Bob Marley & The Wailers’ Turn Your Lights Down Low doesn’t benefit from this somewhat tepid approach.

Material that shares this slightly clinical bent, though – something like The xx’s VCR, say – is judged much more convincingly.

There’s plenty of detail retrieved and revealed by the Monitor Audios, but they don’t create a soundstage of class-leading size or definition, and consequently there’s a degree of congestion to their presentation.

Given a little more space to breathe, music could make the most of the Silver 6s’ dynamism and drive.

Integration between the drivers, though, is absolutely first-rate.

At the bottom of the frequency range the Silver 6s delve pretty deep and hit hard – and, of course, if anything benefits disproportionately from the Monitor Audios’ cast-iron authority over the start and stop of specific sounds it’s the bass stuff.

The midrange is relatively open and detailed, with voices allowed a degree of character even if the 6s’ trademark sonic signature is strongly to the fore here.

And at the top, treble sounds are forthright – the Silver 6s bear a session or two of system-matching if the tweeter, in particular, isn’t to be provoked. But the handover from driver to driver, in either direction, is so smooth as to be imperceptible.

So it’s clear the Monitor Audio Silver 6 is not a speaker that’s going to make itself comfortable in just any old environment attached to just any old electronics.

There are better all-rounders out there at the money – but if you value sky-high finish and build quality, and prize accurate description of the individual elements of a recording, you need to hear them pronto.