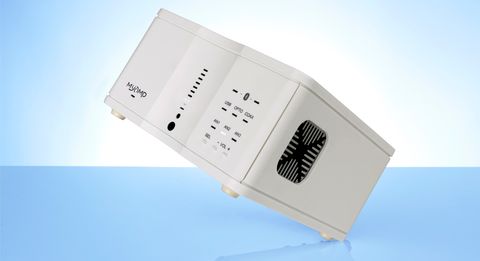 We’re not keen on the plastic finish, but this amp’s attack has caught our attention

Compact, feature-packed, and with a ruthless, attacking rhythm. These key points aptly describe the Micromega MyAmp.

With a high-res DAC and aptX Bluetooth streaming (that can remember up to eight paired devices) on its list of features, the MyAmp seems to assemble a formidable armoury of qualities.

Inside this curious-looking unit lies a class A/B amplifier. On the outside, heat sinks help to keep the unit cool. This is unlike any other integrated amplifier we’ve seen, even in the light of forward-looking models such as the NAD D 3020.

The Micromega’s compact dimensions mean it can be easy to place in the home, but we’re not too keen on its build quality. Given that the MyAmp costs £80 more than its rivals, the plastic finish (which comes in black or white) looks and feels rather cheap.

We’re not entirely enamoured of the tiny ‘credit-card’ remote control either, but at least it has all the options and is responsive. We much prefer using the remote to having to push the unit’s flimsy buttons.

Once you get past the lacklustre build quality, you’ll be pleased to see that the Micromega MyAmp features a decent range of connectivity. Thanks to its built-in DAC, it has single optical and coaxial digital inputs that support full-fat high-res 24-bit/192kHz files, while the Type B USB input can handle up to 24-bit/96kHz.

It also features Bluetooth streaming, with the higher quality aptX codec on board. You’ll have to use a toothpick or the tip of a pen to press the Bluetooth pairing button located at the back of the unit when connecting to your smartphone or tablet.

Otherwise, pairing is fairly painless. The amp can remember up to eight paired devices at any one time. Analogue sources aren’t forgotten, with no less than three line level inputs, a single pair of RCA outputs and a sub output. There’s also a 3.5mm headphone jack on the front panel.

When it comes to sound, the Micromega MyAmp is an energetic, attacking beast. It rips through The Social Network soundtrack’s electronic and synth-based textures with a crisp and driven nature. Timing is snappy, there’s grit and bite to the crunchy notes, and a decent helping of detail.

The screeching strings in Hans Zimmer’s Why So Serious? are filled with tension, and the MyAmp does a good job of conveying the mounting suspense. Feed it tracks that rely on a fast-paced rhythm, (such as from Eminem, SBTRKT or The White Stripes, regardless of source or file quality), and the MyAmp gleefully dishes out excitement and speed. It’s organised, controlled and punchy.

But this attacking sound can veer towards the aggressive, which is sometimes jarring. Drums and cymbals can sound a bit edgy, guitar twangs are taut yet dispassionate. We wouldn’t call it brash, but there’s hardness to the MyAmp’s sound that won’t suit all genres.

It’s not quite as full-bodied and rich as its rivals, such as the NAD D 3020, and we’d like more subtlety and refinement to pick out the nuances in vocals – Birdy’s breathy tone in Shelter isn’t quite as expressive as we know it to be, while the ebb and flow of Tom Waits’s deep rasps aren’t quite as dynamically engaging as they should be.

We admire the control and energy of the Micromega MyAmp. The sheer driving force will entertain many listeners, and it doesn’t discriminate when it comes to low-resolution Spotify streams, either.

That versatile list of connections is also impressive, but its questionable build quality and less-than-subtle sound isn’t quite everything we hoped £480 would buy.