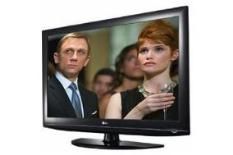 LG should be warmly applauded for its endeavours, but the 47LG5000 isn't a bargain at any price

Like most things, there are degrees of 'too good to be true'-ness. At one end of the scale is the "you have won a massive prize" lottery letters that plop into your mailbox all-too frequently.

At the other end is the enormous LCD television with full-HD specification for less than the cost of a second-hand scooter.

For the majority of its stay in the What Hi-Fi? Sound and Vision offices, LG's 47LG5000 LCD attracted nothing but positive comments. Taken from the box, it's a good-looking, well-made screen that doesn't disgrace itself in the showroom showdown with more expensive equipment.

It's got attention-grabbing specification - that full HD, 1920 x 1080 resolution is particularly pleasing, three HDMI inputs and twin tuners is right on the money, and a claimed contrast ratio of 50000:1 intrigues.

Even Steve, our photographer, admired how resilient to fingerprints it was. In fact, it's safe to say the LG was quite a hit right until the moment we plugged it in.

As there's no easy way to say it, we'll just say it: the LG's performance is pretty much inadequate. A first glance reveals nice clean whites, but look a moment longer and all the shortcomings clamour to reveal themselves.

Motion tracking is woeful, whether from off-air broadcasts, DVD or Blu-ray, and at all picture resolutions. There's a dire shortage of black in most circumstances, too, and edges are ill at ease.

Add in an overblown suite of colours and thin, reedy and occasionally sibilant sound, and you've an underwhelming TV.

If you absolutely must get as big a picture of possible for around a grand, we'd suggest you consider a projector - it's either that, saving some more money or lowering your sights to the 42in ranges.