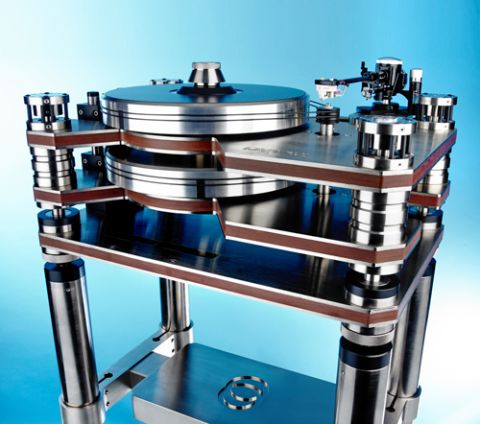 If you’re looking for the finest turntable money could buy the Kronos deserves to be on your shortlist. It’s a hugely capable unit

But if the price isn’t an issue, and you’re really serious about vinyl replay, this Kronos turntable is as good a starting point as any.

As we’d expect, there’s a serious amount of engineering involved here, and a few ideas that, while not unique, are uncommon. The twin platter arrangement gets top billing here.

Why use two platters when just about everyone else think that one is enough? Well, if you have a suspended turntable design (such as this one) there’s a tendency for the sub-chassis – the bit that supports the platter and arm – to try and turn in the direction of the spinning platter.

Think of a bucket full of water being stirred slowly by a spoon. Given enough time all the water will spin along with the stirring motion.

Of course the sub-chassis never actually spins because it’s held by the suspension, but what does happen is an unsteady equilibrium that (Kronos says) affects the deck’s ability to resolve the finest of details.

The addition of a second identical platter that spins in the opposite direction is said to cancel out this movement, and so improves resolution.

We disabled the drive to the second platter – in other words, took the belts off – and the deck certainly sounded messier and less insightful.

So, the twin platter system obviously works in the context of the overall design. But, there are obvious downsides to this arrangement beyond the additional expense and increased mechanical complexity.

By adding a second platter, and another motor to drive it, there is an issue with greater mechanical noise in the turntable structure – never a good thing.

Kronos has tried to minimise this with the use of high quality DC motors and a well engineered main bearing design.

The spinning speed of both platters is controlled electronically by means of optical sensors that read the markers imprinted on the edge of the platters.

The individual speed read-outs are shown on a large digital display at the front of the deck.

Apart from the drive system the company has taken much care with the turntable structure. Its top plate, sub-chassis and base all use a layered construction of metal and high-density wood.

This helps to deliver a rigid but well damped structure. The whole lot is suspended with Viton/silicon (a type of posh rubber) o-rings.

Overall build is as solid as you’d hope for, and there’s no denying the impressively high quality of the engineering involved in the mechanical components.

The Kronos is not beyond criticism though, and we’d like to see better attention to detail, particularly when it comes to finish.

As an example, the central wooden layers of the top plate and sub-chassis aren’t machined to perfection, and in some areas we could feel what we think is glue residue on the outer, visible edge.

It needs to be better. Clearaudio has decks that have a similar layered construction and does a notably better job in terms of finish. Kronos needs to pay more attention here.

The turntable weighs in at a seriously hefty 41kg, and that’s before the arm and cartridge are added.

If you have the space, the solidly made dedicated support table – add another £10k – performs well but the deck shouldn’t have any issue being used with another support as long as it’s large, rigid and structurally well behaved.

Set-up is pretty straightforward, but given the price level we would expect the dealer to optimise the deck on site.

It’s pretty simple to use; on/off and the speed change are controlled by a couple of touch button switches on the base.

These aren’t particularly responsive and there’s a knack of using them. Initially, we got pretty frustrated with the lack of response, but familiarity meant such issues faded.

The price, understandably, leads to the expectation that the Kronos wows from the off. It doesn’t.

This is a deck we took some time to warm to. It has a measured, understated approach to music making that garners admiration over time.

Given a complex piece of music such as Radiohead’s 15 Step the Kronos takes it all in stride.

We’re taken with the level of clarity, and the deck’s way of delivering each sound with precision without losing sight of the musical whole.

Most turntables tend to turn this into a bit of a mess, making a lot of the sounds feel like random events, but that isn’t the case here.

The Kronos is cohesive, organised and fully in charge. It’s mighty impressive in this regard.

Dynamics – both large and small scale – are beautifully defined and convincingly fluid. There’s plenty of punch to the distinctive bassline of 15 Step, and the deck has no trouble communicating the drive and varied pacing of the piece.

A switch to our reference Clearaudio Innovation Wood – a mere snip at around a quarter of the price - shows that there’s greater exuberance in the piece than the Kronos reveals, but it’s at the expense of resolution and precision.

For the first time ever we find our reference turntable a little unruly and lacking fine detail. It’s quite eye opening.

Move onto something grander such as Beethoven’s Fifth Symphony and the Kronos responds with a huge sound stage that’s impressively wide and surprisingly deep.

There’s a pleasing sense of space to the recording and a wonderful stability to instruments as the music grows in intensity.

The tonality of the arm and cartridge chosen is spot-on, and overall they make really good partners for the deck.

We’re also taken by the authority of the complete package and the feeling of power it delivers during crescendos – there’s little feeling of holding back, and it makes for an engaging experience.

Hear the Kronos in a suitably talented system and there’s no denying that it’s a hugely capable product.

That price puts it beyond the means of most people but it does show the sonic heights a humble record can reach.

The Kronos isn’t perfect; no product, no matter how expensive, is. But it is incredibly tempting none the less.