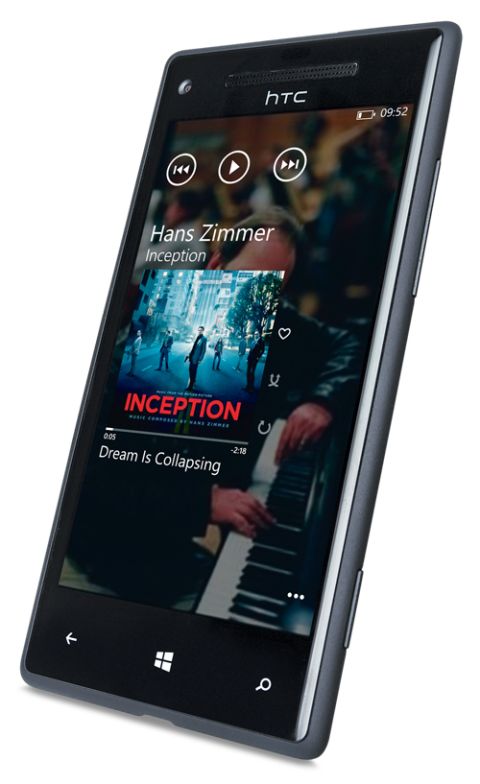 Nokia isn't the only smartphone manufacturer to make Windows Phone devices, there are other brands dipping their toes into Microsoft’s waters. Samsung has the Ativ S, while HTC has this, the HTC 8X, its top-end Windows smartphone.

So how does it fare against the Nokia Lumia 920, and can it offer a worthy alternative to Android and iOS?

While Nokia has gone supersize with the chunky Lumia 920, the 8X is more practical, weighing in at 55g lighter. There are similarities in the design though, with both sporting a curved back that sits nicely in the hand.

The polycarbonate finish to the 8X divides opinion, however: for wear and tear it scores well, but feels a little cheap, and its selection of colours – red, black, purple and yellow – don’t really help here. What’s more, the buttons sit flush to edges and aren’t that easy to press.

In terms of spec, though, it ticks all the boxes. The 4.3in Super LCD screen has a pleasing 1280 x 720 resolution, which means an impressive 342 pixels per inch, while there’s a solid 1.5GHz dual-core processor and 1GB RAM.

Not content with the 8MP/1080p main camera (below), HTC throws in an impressive 2.1MP/ 1080p front-facing cam, too. But the 16GB memory is your lot, the sealed design meaning no SD card slot.

Of course, the Windows Phone 8 experience is largely similar to that of the Nokia devices. That said, while Nokia offers genuinely useful apps, HTC serves up a meagre lot.

With the Windows Phone app store looking sparse on the apps front – no BBC iPlayer action, for example – some extra software would be nice. If apps are important to you, this could be an issue.

Still, the WP8 experience is enjoyable. The HTC 8X has a sharp screen so the Live Tiles design looks crisp, while the processor does a solid job of keeping up with the fastest of finger commands. It’s a good-looking OS, but it needs more apps to emerge within the WP8 template.

Web browsing comes via Internet Explorer (and phone search via Bing), with the address bar at the foot of the screen. The HTC is solid enough, the screen being a good size for comfortable browsing, with only a slight dullness to some web pages holding it back.

But this is more of an issue when viewing video. Again music and video is housed in one app alongside Xbox-related features, and videos look flat and lacking in depth. Edges are sharp and there’s good detail, but colours lack punch.

HTC continues its tie-in with Beats Audio, though you can turn that mode off. Sonically it struggles, sounding bright in the treble, and lacking weight and detail.

Whichever way you look at it, the HTC 8X is no rival for the iPhone 5 or Google Nexus 4 in the audio and video stakes.

It’s more practical than the Lumia 920 but, crucially, doesn’t perform as well in the key areas of audio, video and web browsing. Still a decent addition to the initial WP8 roster, but we expect better will come from HTC and Windows.