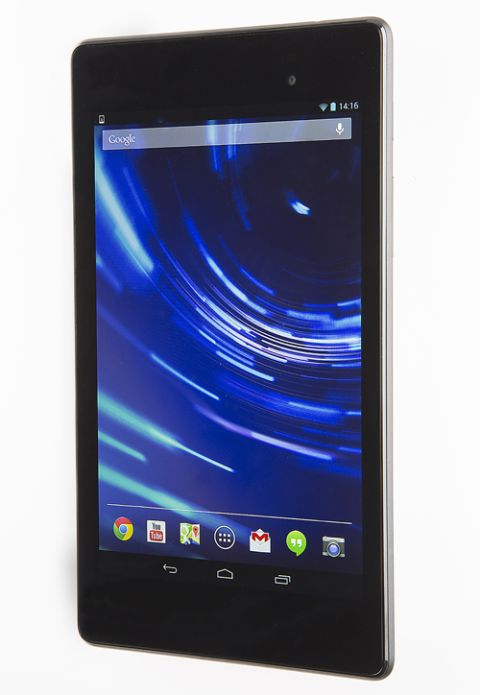 Best tablet up to 8in, Awards 2014. With stunning screen performance and fantastic ease of use, the Nexus 7 is even better than before

The new Google Nexus 7 seriously impressed us when we reviewed it back in October. So much so, in fact, that it took 2013’s sub-8in tablet Award and snatched the Product of the Year honour from under the iPad’s nose.

Of course, there has been one small thing to happen since then: the launch of the iPad Mini with Retina Display. There’s no denying the considerable price difference between the two, but it’d be foolish not to consider them as rivals either.

The new Nexus 7 certainly brought the fight to the first iPad Mini, but how does it fare now?

In short, very well. Its screen, even compared with the new iPad Mini’s crazy-sharp 2048 x 1536 pixel display, still holds its own.

While the award for out-and-out sharpness would have to go to its Apple competitor, the Nexus 7 still remains one of the crispest screens we’ve seen. It is bright, punchy and packed with detail.

The Nexus 7 is backed by the latest version of Android 4.3 (Jelly Bean) and the old Tegra 3 processor has been swapped for a more powerful 1.5 GHz quad-core Snapdragon S4 Pro processor and 2GB of RAM.

The design has been streamlined as well (more on that later), but the battery size has been reduced to 3950mAh (from 4325mAh) to make way for a slimmer chassis.

We found this to be largely correct, with the Nexus 7 lasting a couple of The Great British Bake Off episodes and some frequent internet browsing throughout the day before we found ourselves reaching for the microUSB charging cable.

The Nexus 7 comes in two versions: 16GB and 32GB. There’s still no scope for expanding the storage via an SD card, though, so choose carefully. Both models come with wi-fi, Bluetooth 4.0 and NFC as standard, while the 32GB version is also available with 4G LTE.

The new Nexus 7 itself now costs £40 more than its predecessor, but not only is it still cheaper than the iPad Mini at similar storage capacity, but we also think it’s more than worth it for that incredible boost in screen quality.

It’s the screen that really grabs the attention. The Nexus 7 looks absolutely gorgeous. The boost in resolution renders the 7in (7.02in to be exact) screen one of the punchiest, brightest and sharpest we’ve ever laid eyes on.

White levels are stark clean and bright, and contrast beautifully against rich and vibrant colours and deep black levels. The amount of detail is staggering – the outlines of app icons and widgets are pin-sharp, and web browsing and e-reading show crisp edges to solid black text and a noise-free, bright background.

The powerful processor and the Android OS work together to deliver a screen that’s faster and more responsive than before, with a smooth-as-butter operation that makes the Nexus 7 a joy to use.

There’s no perceptible lag or hitch to the interface, apps open and close swiftly, and games come to life with boosted graphics and speedier reaction times when using multiple gestures across the touch screen.

The strong contrast levels deliver striking, punchy highlights against startlingly dark blacks, and there’s plenty of subtlety in between to give a real sensation of depth and dynamics.

Even a streamed episode of Peaky Blinders over BBC iPlayer looks smooth and lavishly detailed, with the Nexus 7 deftly handling the grey and shadowy hues of post-war Birmingham.

It’s a slightly cooler palette compared with the richer, warmer tones of the original iPad Mini’s picture. But the Nexus 7’s screen delivers such remarkable clarity, sharpness and depth of detail that it comes out on top out of the two.

Another side-by-side comparison shows just how improved the new Nexus 7 is: the old Nexus and iPad Mini now look positively dull and low-contrast, while the pixilation at the corners of apps and text is now glaringly obvious.

Slip on a pair of decent headphones – the AKG K451s will work a treat – and you’ll be rewarded with a strong and clear sound that packs in plenty of subtle detail and dynamics.

Sbtrkt’s Wildfire is fast, punchy and rhythmical, with solid basslines accompanying an open and clear top end, while a change of gear to Adele sees her vocals ring out with clarity and emotion.

From MP3s to WAVs to Spotify streams, the Nexus 7’s audio performance is confident and full of energy. The iPad Mini has better precision and rhythmic ability, but the Nexus still offers a solid, detailed and accurate sound.

Dynamics are handled well and there’s an energy to its presentation that we found lacking in some lesser tablets. It’s easy and enjoyable to listen to over long periods, which is often half the battle in a portable device.

A rather rare occurrence, though, is that the Nexus 7 sounds surprisingly good through its stereo speakers.

The speakers are on the top and bottom edges of the tablet (or the left and right sides if you’re holding it in landscape orientation) and they produce a solid and rich sound that manages to dodge sounding tinny and closed in, unlike many of its competitors.

New to the Nexus 7 is a rear-facing 5MP camera. It joins the front-facing 1.2MP one and comes with handy options for adjusting exposure, white balance, scene and photo size, along with flash and timer options.

While taking photos with a tablet isn’t as quick or instinctive as with a smartphone’s camera, the Nexus 7 is good for the odd snap or two – provided it’s in daylight (Nexus 7 on top).

We found the 5MP camera takes bright and crisp photos in natural light, with outdoor shots of the river Thames by our office bursting with punchy colour, clean whites and a good level of sharpness. Videos shot with the 5MP camera look clean and smooth, too.

Take the camera inside, though, and it doesn’t fare as well with artificial lighting. Results were inconsistent, but for the most part the Nexus 7 struggled to pick up fine detail, with photos looking quite noisy and washed out (Nexus 7 on the left).

Compared with similar shots taken on the iPad Mini, the Mini dealt a lot better with indoor lighting, and revealed more detail and less noise. The Mini is richer and more natural with its colours too.

The Google Play store is full of all the latest Android apps, games and videos to populate your new tablet. Unlike last year it now features BBC iPlayer as well as 4oD and ITV Player.

That gap still exists on the Nexus 7, and it would be great to see developers take advantage of the space and HD resolution of the Nexus 7’s screen for more customised apps.

On the other hand, Google’s own batch of widgets (from Gmail and Drive to Chrome and Google Now) works seamlessly with the latest version of Android. Google Voice is accurate and responsive even to lazy mumbles, and makes searching via voice commands feel intuitive, much more so than Apple’s Siri.

Another new feature is the ability to set user profiles on the Nexus 7. Delve into the tablet’s settings, and you can set up two different ones: User and Restricted.

The User option lets another person set up their own profile on the tablet, customising the screen with their own selection of apps and widgets.

In the Restricted profile, you can choose which apps to allow (or restrict), similar to the Guest user profile on computers. Both options automatically prompt you to set passcodes on your own profile, and you’re given the choice of which user to log in as (they show up as little round icons) when you unlock the screen.

It’s a useful feature, especially if the tablet will be shared, and means you can keep your photos, videos and game progresses safe from prying eyes.

The original Nexus 7’s size and build was crucial to its success, and the new version has come back with a slimmer and lighter design to make it even more desirable. The new Nexus is 2mm thinner, with a smaller width of 114mm compared with the predecessor’s 120mm. It’s a light 290g (versus 340g), but has enough heft to still feel sturdy.

Once again built by Asus, the chassis loses its heavily textured back to a smoother, rubberised finish that feels so much sleeker and classier.

It strikes the right balance between, and gives the 7 a premium feel that can sit proudly next to the sleek aluminium finish of the iPad Mini. It’s even easier to grip and comfortable to carry, making it perfect for portable use.

It’s durable, too. We spent a whole week with the tablet flung on our desks, shoved into drawers, dangled from our fingertips and jammed inside small handbags, and the Nexus stood up to the test.

It proved to be a robust and sturdy device with no scratch or scuff in sight, and the design tweaks made a huge difference to both the feel and comfort of the tablet.

There’s still quite a bit of bezel surrounding the screen, but we quite like having the space to rest our thumbs without accidentally touching a control that interrupts our video mid-stream.

The volume and lock buttons are hidden under the curve of the chassis. It’s a nice thought, as it means they don’t intrude upon the screen – but it did take a while for us to instinctively locate them. We suspect it’ll become second nature with prolonged use, but as a cheat: remember that the headphone jack is located in the top right-hand corner.

And with all this in mind, let’s not forget that the new Nexus 7 also has an attractive price.

It doesn’t sit at the Hudl’s budget level, but at £200 for the 16GB wi-fi only version (there’s also 32GB in wi-fi only and 4G/LTE), it’s £140 cheaper than the new iPad Mini with the same storage. And that’s quite a consideration.

The Nexus 7 is the best 7in tablet on the market, not to mention the best tablet of any size at this price. Even if you have more cash to spend, you might question whether you actually need to…